Another gloriously sunny day to visit the colleges.  On the way to Christchurch we went in search of University College and its chapel. Although it was closed to visitors, the disappointed old ladies must have moved his heart, because the nice porter let us in anyway.

I had read Jane Brocket’s How to Look at Stained Glass before our trip and made notes on places she mentions, this being one. The 17th century windows include a very fleshy Adam and Eve,

Jacob dreaming of the ladder to heaven “while the dreamscape action of angels ascending and descending whirs around him with angels on a grand staircase like an early Astaire/Rogers musical,” says Jane;

and this fierce whale threatening Jonah. 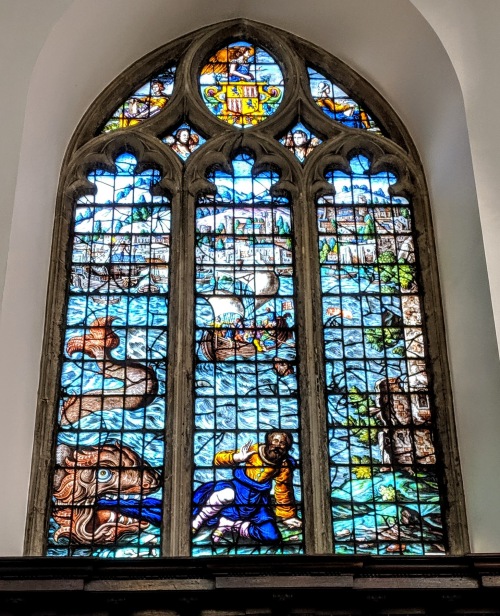 Very well worth the stop.

Christchurch begins with these gorgeous borders, 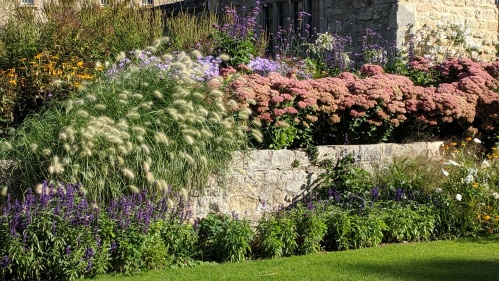 asters and grasses and sedums and more. Once inside the college, the staircase ceiling is lovely,

the dining hall impressive with Alice references in the windows as pointed out by a porter (look closely to see Alice and other characters hiding at the bottom of each window).

And here is Alison with Carroll himself! 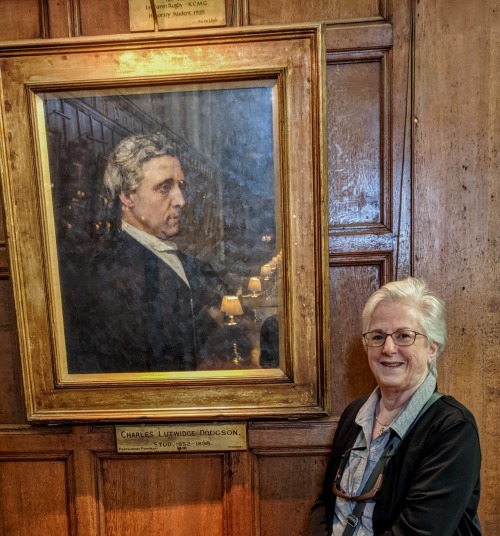 Though I had been here ten years ago, I didn’t remember seeing the cathedral, our  next stop.  We were on the lookout for Burne-Jones’s windows, which did not disappoint. Here is St. Frideswide, patron saint of Oxford, hiding in the pigsty from the rapacious King Algar,

here is St. Cecilia being beheaded,

here are swirling clusters of grapes above the heads of the saints. 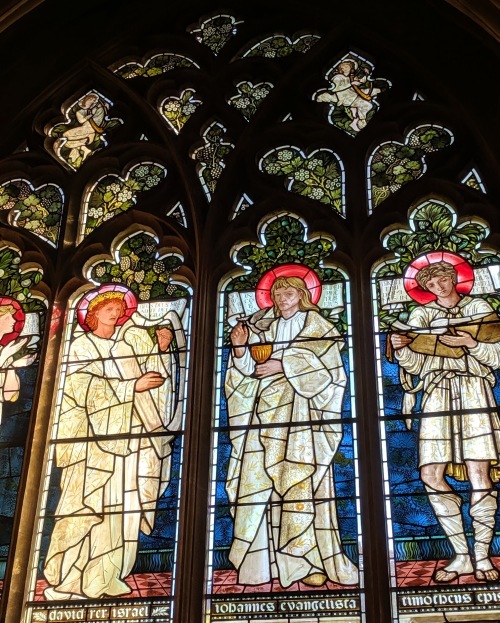 After the tour we visited The Picture Gallery, which I found pleasant but underwhelming.

We rested up a bit and ventured out again for the Bodleian tour, which you must book in advance and is highly regulated as to what you can see (and no pictures!). 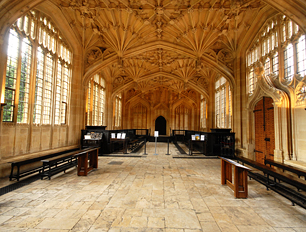 We learned more about Duke Humfrey’s library – the money ran out partway through, which you can see if you look closely at the stonework and notice where the decorations stop, but it’s a beautiful space much seen in film (see yesterday’s entry). Then we walked up and up the stairs to the library itself.

No flames allowed and no electric light or heat till the 21st century, so hours were limited. Until a few years ago, scholars placed their book requests through a pneumatic tube system, which meant you waited about three hours before your books arrived at your desk. The system is online now, so much faster. Shelves and shelves of ancient books, some rows turned spines in because of the way the chains were attached, with one chain still extant to show visitors.  And notice the ceiling! 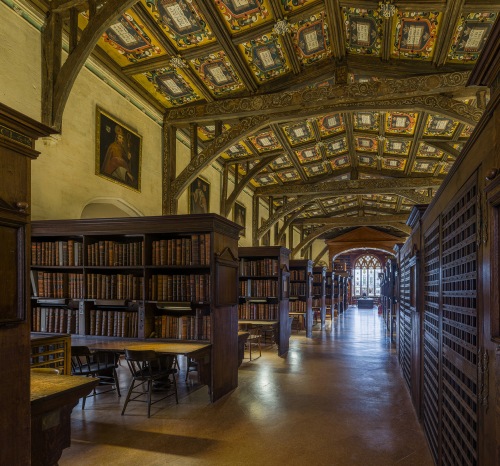 Another HP filming site, of course. A short tour but very interesting.

From here we went across to the new Weston Library building, renovated at great expense several years ago, now featuring a vast open expanse with views of the stacks on the floor above (reminiscent of the Library of Virginia building).  Then another visit to Blackwell’s, which is even more wonderful than you can imagine.

I came away with Clare Tomalin’s bio of Dickens (the biography project) and a Mick Herron set in Oxford. Yum!

Tonight we had dinner at a Thai place on the High Street, which was a delicious change from the pub food we’ve had so far. Vegetables! And so to bed.

This entry was posted in England, Oxford. Bookmark the permalink.