Category Archives: much depends on dinner

One of the joys of revisiting the Cotswolds (and England in general) is that we are not driven to see, see, see, so today was a relaxed day.  We wandered through Stow after breakfast, visiting the market cross in the square (thanks, Alamy), about which more later,

stopped by St. Edward’s church with its amazing door,  said to have inspired Tolkien’s Doors of Durin,

visited the pharmacy for AO’s ear (stopped up due to the plane?), a lovely little shop where we bought socks for various people, and the bookstore, where I bought a walks guide for Northleach and area.

Then I left AO to her own devices while I took a little walk suggested in the Stow Walks booklet. The first part, through town and then along a rough track through the village of Maugersbury,

was very pleasant, with beautiful views of the landscape and Icomb Hill,  said  to  have  been  the  site  of  a neolithic  hill  fort. 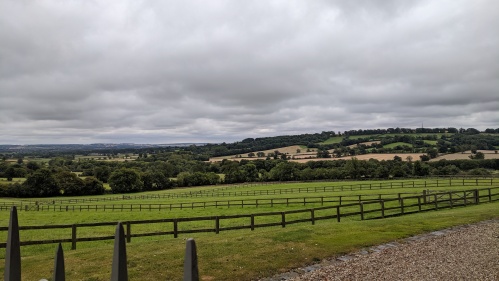 The next bit was along the the ancient Fosse Way,  but in this section the Fosse Way goes along the A429, a very busy two-lane road.  Luckily there was a sidewalk for pedestrians but still, some of those trucks came barreling down the hill at a great rate.  Then away from the highway and through a cemetery, along the allotments with these beautiful dahlias,

and then to a confusing bit. A friendly fellow pedestrian offered help, so I followed her through a little ture or snicket or alley and found myself back in the town.

Fortified with the delicious baguettes we had bought earlier, we set out for a mild little trip to Northleach, where our friends Peggy and Eddie spend a few weeks every spring.  The church is a classic perpendicular,

and inside were several brasses featuring worthies standing on wool sacks,  from  which  local  fortunes  were  made.  You  can  see  that  they  are  protected  by  these  rugs  most  of  the  time. 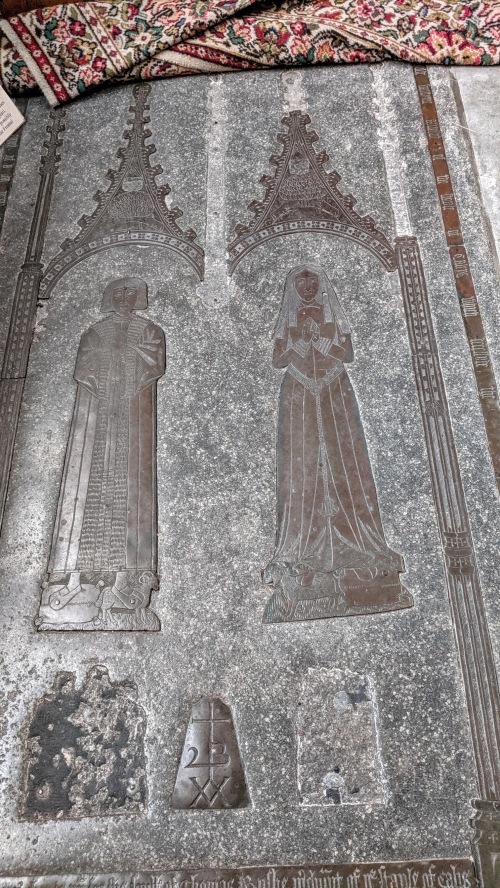 Shades of Angela Thirkell! The chatty woman at the info desk has children in the US and spoke admiringly of our country – except for the frequent random murders, of course…  We also stopped briefly near Sherborne, where P&E rent their National Trust house. 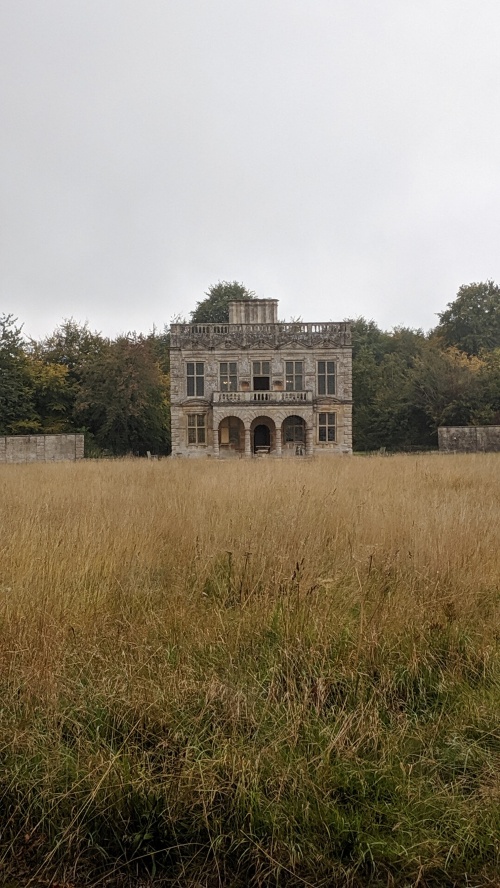 Doesn’t it look ghostly with the autumn grasses?  You get there down a long, long one-lane road, luckily with a few turnouts for oncoming traffic. Beautiful, but I wouldn’t want to be driving down there in the dark!

Next on to Burford in search of the garden centre that Peggy touted.  The main street was so congested, and we were not sure of the location, that I finally turned on my phone ($10!!) to get directions.  The centre was a mix of high-end home furnishings and the best garden shop in the world.

I picked up some seed packets, and Alison found a darling little bird for her windowsill.

Our final stop was Minster Lovell, a small village along the banks of the Windrush, which we would call a creek or stream rather than a river.  Charming, but nowhere to stop and admire it so we went down the road to the church.

Small and nice and obviously hard to maintain, with a shrinking number of congregants and an ancient building in need of maintenance.  But the interior seemed well used and busy. No stained glass, thanks a lot, Henry VIII!

Back towards home, planning to stop at a gas station to top up the air in one of the tires, which causes the car to display exclamation marks.  Unfortunately, even though we got the tire up to 32 psi, the car is still unhappy. Maybe tomorrow. We came back to Stow and the promised roadworks meant we couldn’t take our usual route in, so we ended up in Lower Swell (because once you’re on a road, there’s almost no place to pull over or turn around).  Reversing and retracing our route, we finally found our familiar Sheep Street and home. Driving is always harder at the end of the day. Dinner tonight at The Bell was the best dinner of the trip so far: Lamb for AO, sausages and a rocket salad with pickled shallots for me, both imaginatively cooked.

Posted in dahlias, England, much depends on dinner, walks and hikes