Musical pub crawl and how wonderful it was

This was another Rick Steves recommendation, and it was great!  We met at Oliver St. John Gogarty’s (named for the man on whom Joyce based stately, plump Buck Mulligan, in real life a surgeon and bon vivant).  This pub is right in the Temple Bar area, the former warehouse district that is now filled with noisy bars and a sprinkling of interesting shops.  After a decent dinner upstairs, we went down to the bar to meet the tour.

Our first stop was the Ha’penny Pub.  Our two acoustic musicians explained Irish musical culture and the place of various instruments and proceeded to sing and play traditional songs to illustrate their points.  This sounds dry and academic, but it was anything but.  I was particularly struck by the singer.  He did one song in a style that evolved after poverty and British oppression left musicians without any instruments – sort of an Irish beatbox (wish I could remember the real name).  He also sang a mournful ballad in the old style, along with many others, some of which we could join in on.

The second pub, Brannigan’s, was up O’Connell Street in a building previously used by nuns,  complete with pews lining each side of the room.  Our musicians now called for the audience to offer a tune.  If you attend a real session (not a concert), you are expected to take part even if you don’t play an instrument – it can be a song, a story, a joke, something to keep the conversation going.  Of course, I had already chosen the Robin Williamson song about the devil that I heard once at Jonesborough and never forgot.  I was a bit nervous about a political song in territory not my own, but I just stood up and did it.  Unfortunately, no one else offered a song until after some time one woman taught us a silly song she had used teaching English somewhere abroad.  Still, the mood of the group seemed cheerful and I think everyone had a good time. 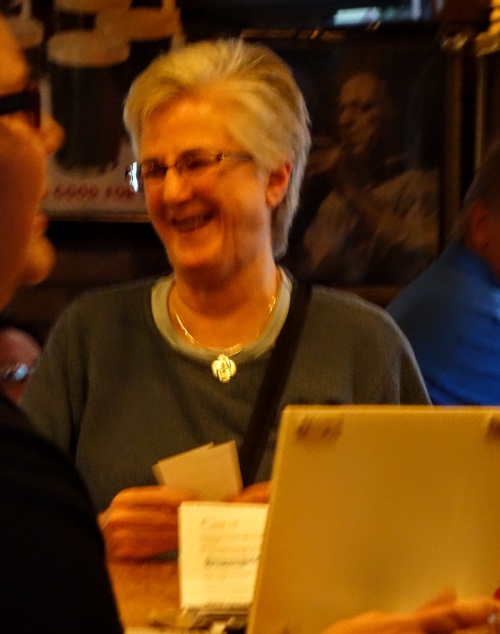 Here’s a clip of our two musicians singing a capella.