The only inhabited island in Northern Ireland

Today we booked a tour of Rathlin Island, accessible via the 8:00 ferry from Ballycastle harbor, about half an hour away.  We accordingly rose at 5:30 and were on the road by 7:11.  There was almost no traffic, and we scooted along little roads that hugged the coast.

The ferry ride was a bit rough at the start, but once we stopped bouncing around it was fine.  Along with us were a couple Rescue guys and a couple people with laptops.  At least one student got off in Ballycastle, since the only school on the island is a primary.

Here’s a picture of the mainland from the island.

Julie, our guide, met us at the dock, along with her darling little dog Nipper, whom I wish I had photographed.  She led us on the meandering walk around the eastern side of the island.  At its height there were about 1500 people, but it’s now down to about a tenth of that (and yes, everyone knows each other AND knows each other’s business).  During the Famine, a ship took 500 people, all at one time, off to America, where they might never have been heard from again.  I’d love to know more about that story.  Luckily the people on Rathlin could also fish and climb for birds’ eggs, but it was still a hard, hard time.

Julie turned out to be a zookeeper – one of those professions you hardly think can be real any more.  She worked at the Dublin Zoo and worked in Canada when they exchanged zookeepers for six months.  She also worked on wildlife conservation in China and taught English in Belgium for ten years.  She’s been on the island since 2010.  Her combination of wildlife knowledge and island knowledge made her a perfect guide.

On our meander we saw gray seals basking by the shore, 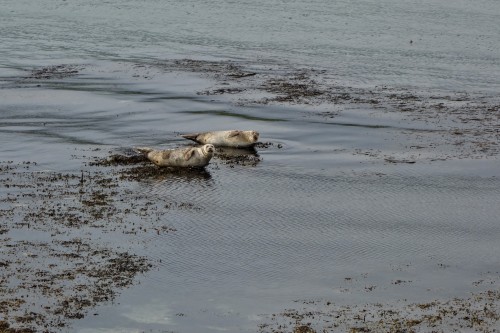 along with five or six other heads in the water.  She told us they were curious creatures, and the heads did seem to follow us as we walked along.  We marveled at gannets who plunged straight down to catch fish, and hooded crows that are common as dirt here but new to us.  Starlings, swallows (their real name will come to me), cormorants, and eider ducks were all over the harbor, too.

and to visit two churches, a Catholic one with stained glass, 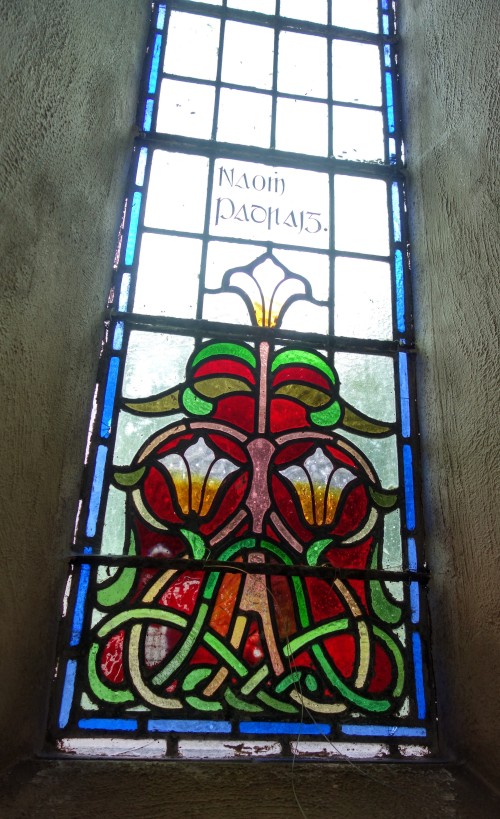 and a Protestant one with many plaques in memory of the Gages, once lords of the manor here.  Only the latter church has a graveyard, leading people to joke that only on Rathlin can you start life as a Catholic and end as a Protestant.  Several graves were of people lost at sea, back during the 19th century, during WWI and more recently, too.  Many of those seemed to have happened during January – be careful out there!  And of course, since this is the UK, an odd little sign. 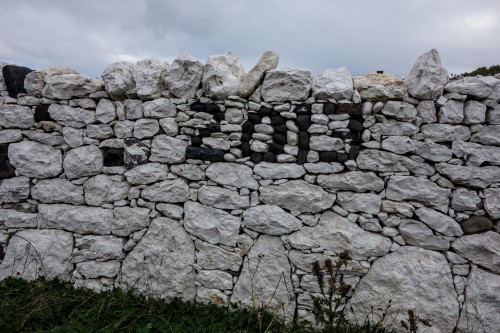 that is about to be turned into an art gallery or a science lab, several sightings of the visiting nurse visiting elderly patients (Julie knew who lived at each house), and a short climb to great views rounded out our walk.

After a cup of tea Julie gave us a ride most of the way up to the RSPB seabird centre at the other end of the island.  We said goodbye and walked the last 15 minutes of the road to the centre (their spelling). Along the way we saw heather, gorse, sweet grass (that’s not it), wild poppies and fuchsias, steep road, cows and sheep grazing by the sea. 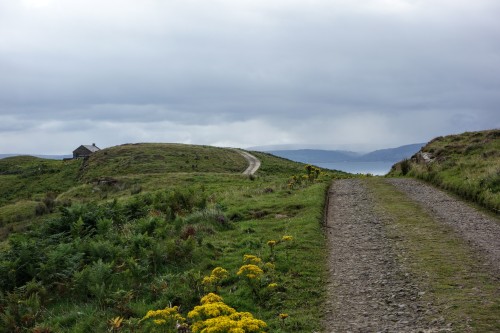 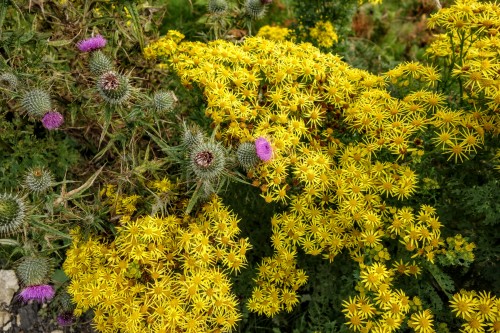 We were about two weeks too late to see puffins, and about five days too late to see the fulmar chicks launching themselves into the air.  The only thing left was to climb down the 100 or so steep steps to the observation area.

Lord, the wind was blowing hard!  I clutched the railing with both hands and tried to look down at the next step rather than out into space.

Luckily, the Puffin bus did arrive (it had been in doubt), so we did not have to walk the 4 1/2 miles back.  On the other hand, the driver started the bus, parked it at the fence overlooking the steep cliff, and then climbed out to seek a missing passenger.  “It’s ridiculous to leave a bus running at the edge of a cliff,” one of us was heard to say. 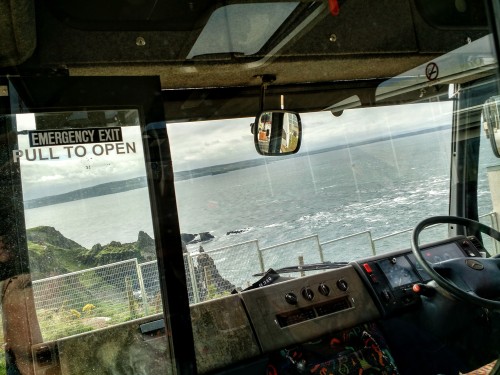 The ride back was steep with one near miss (“I’ve opened my eyes now,” the driver joked,) and left us off by the pub.  Here I had the biggest and most delicious piece of fried fish and chips I’ve ever eaten.

We are planning to take the 4:15 ferry home so it’s time to say goodbye to the pub’s good wifi and pack up for the afternoon.