The latest trip – Dublin and Northern Ireland – started with the usual efficient flight but without much sleep.  Note to self:  next time, try Peggy’s tip of traveling during the day so you don’t have to try to sleep in a noisy, cramped metal box.

We arrived to sunshine and beautiful clouds, bussed into the city and checked into the Harding Hotel, perfectly situated across from Christchurch Cathedral.

The cathedral was beautifully sihouetted against a gray sky. 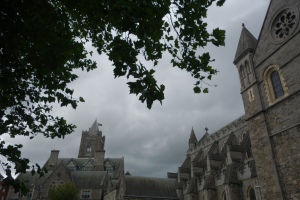 Outside was a very moving sculpture that would be right at home in front of the library. 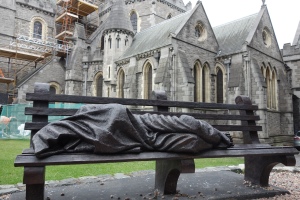 Inside was notable to me mostly for the floor tiles.  A major Victorian renovation meant that most of what we saw was nineteenth century, incuding the tiles, but they were based on medieval tiles still extant in one of the small chapels.  As always, it made me think of quilts.

There was also some beautiful Victorian embroidery on the altar cloth.

In the crypt were the lovingly preserved bodies of a cat and a rat found mummified below the floors and mentioned by Joyce in Finnegan’s Wake.  One of the church’s best things, I think.

Even after a nap, we were still zonked, so after a delicious dinner in the Copper Alley Bistro downstairs, we had an early bed.