This morning we left our seaside city for Marrakesh.  First, Phyl and Marge had to consult about the route (more about that later).

Then, the luggage lined up along the wall 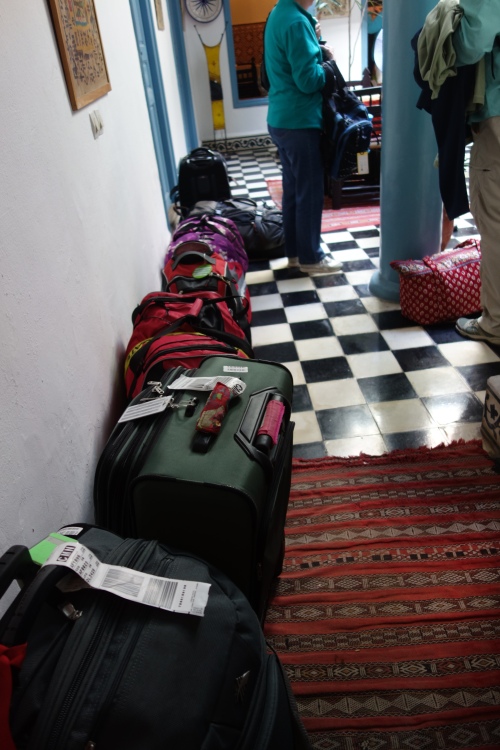 awaiting the man with the cart to bring it to our cars parked outside the medina (no cars inside but plenty of motor scooters, bikes, donkey carts, etc.)  Then a fond farewell to Miriam, who took such good care of us, especially when Elizabeth came down with something and had to spend the first day in bed.

The two cars started out well, with Anita in the lead.  She is a crackerjack driver and never forgets there is someone trying to follow her.  We pulled over when we saw these goats in a tree. 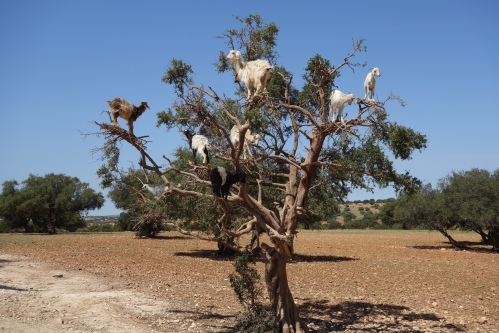 Apparently goats like to nibble on the foliage of the argan tree, which thrives in drought conditions and produces the argan oil that’s for sale everywhere.  The others had visited an argan oil forest the day before where they saw goats in trees, but we had missed it.  Lots of photos later, 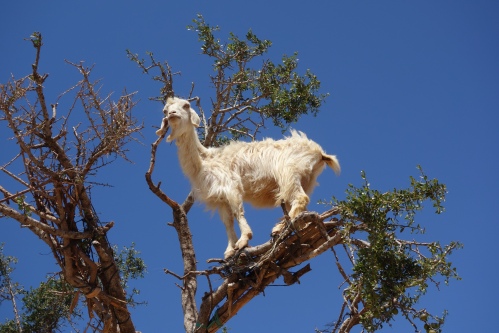 and many entreaties to hold the baby goats, and of course we dispensed some dirhams to the goat herders who obviously station themselves here just for the tourists.  But we know from the others that it is a real phenomenon, so there you are.

Our next two stops were for a quick lunch (chicken brochettes and ice cream at a roadside cafe) and for fuel (oilgas means diesel, it turns out).  Then the real fun began.

As we got closer to Marrakesh, the traffic got crazier.  All kinds of wheeled vehicles compete for space, and the pedestrians do their best not to get run over.  Elizabeth was trying to stay right on Anita’s bumper because if she didn’t a taxi would nose its way between us.  Lots of sudden stops and near misses caused me to either close my eyes or avert my gaze, since my gasps and shrieks would not help the situation any.  The worst moment came when Phyl knew that Marge was leading the Anita car in the wrong direction and jumped out to tell her so, almost getting knocked down by a motorbike in the process.  Scary!

We finally, after a few wrong turns, found our way to the parking lot close to the medina.  Here five of us were to hire a man with a cart to take the luggage to our riad.  That part worked well.  The riad is elegant and serene.  We filled out our paperwork, explained that instead of eight women we were indeed seven women and a man but that he was famille, so that was all right.  And then we waited.  And waited.  And waited, getting more worried all the time.

It was about 2 hours after we arrived that the bell rang and the three of them limped in.  I will leave it to a better pen than mine to tell the tale, but in outline, they got lost, Marge hopped in a taxi that could lead the way for the two cars, Anita got separated from the taxi and from Phyl’s car and had no phone, and no address for the car rental place or our riad.  She determined where the other two would have to drive in order to retrace their steps and stood there for an hour and twenty minutes before they drove by and spotted her with great joy.

The ministry of tourism and the police came to Anita’s aid before it was all done, but at last the three were reunited – in the middle of the street, as far as I can tell – and they got home at last.

After some short R&R time, we set out to the famous Jam El Ffna to see the sights:  snake charmers, scribes, musicians, and a strange musical act with a man wearing a rooster and a dove on his head.  We were fading fast so found a place for dinner – not easily – and made our way back home for the night.

One response to “Essaouira to Marrakesh”