I left the house at quarter to seven, rush hour traffic to National, easy flight to JFK and transfer to the international terminal.  A sandwich lunch and then Biffy, Ed and Joseph (their chauffeur of the day) showed up to much hilarity and amazement – are we really doing this?

We met the others while queuing for boarding passes.  Phyllis, Biffy’s friend, and her sister Marge, the organizer of the trip, are the two who lived in Morocco as children and have visited often.  Susan is Marge’s college roommate, and Anita and Karen are old friends who traveled with Marge in her travel agent days and went on to become friends with Marge.  It looks like a congenial group, and just the right size for easy travel and conviviality.

The security lines were long and tedious, but we got through and finally got on the plane close to 7:00.  A truly diverse set of passengers, many tourists but at least as many people returning home to Morocco and points nearby.  Unfortunately, a new version of the evil baby – this on screamed randomly, just enough to startle you awake – made for a rough night, not helped by the uncomfortable seats and extremely talkative neighbors.

But then we landed, to a cool, crisp dawn with palm trees on the horizon.  Picked up the luggage and the two cars (some time was taken up with these tasks),  and the first car hit the road.  Biffy is driving the Kangoo, an upright model with nice big windows for the tourists.  We made our way out of the airport and south from Casablanca to the coast.

The traffic was not too crazy, just a little, made more exciting by the often rough roads, with big potholes or worn tarmac or skimpy shoulders filled with ruts.  Add to this the occasional donkey cart, horse cart or motorcycle attached to an overflowing cart, random bicyclists and walkers, and the way is quite interesting.  At least they drive on the right!

We followed a secondary road down to the old Portuguese city of El-Jedida.  Here was our first meal of the day, fresh orange juice, coffee and petits pains as we sat along the promenade and the Atlantic beach. 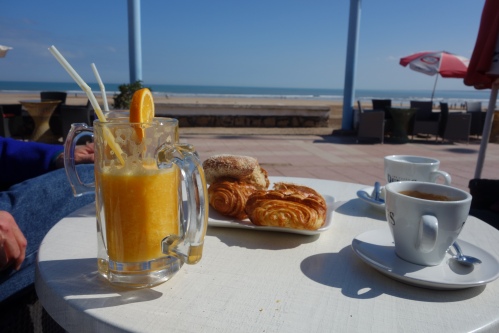 Our effusive waiter/owner Khalid was very welcoming in English and French (plus Arabic, Turkish and Italian, he told us) and waved us off with fond farewells.  Not before a visit to the bathroom, to which we were escorted by a lovely young woman.  A tiled room with a hole in the bottom, plus a spigot at squatting level, washbasin just outside and paper towels dispensed by the young woman just beyond that.  Shades of France in 1966, but spotlessly clean.

We walked from here into the medina, the walled old town, on the way stopping by this boat-building enterprise. 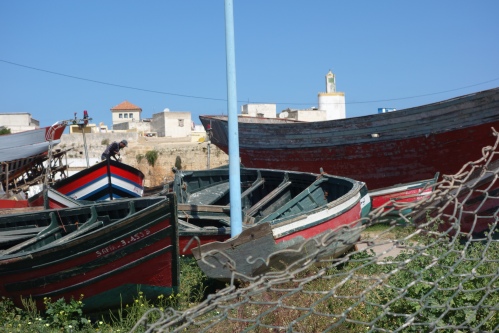 Inside the medina, a World Heritage Site (check!), we stopped first at the old cistern, built in the 16th century, forgotten after the Portuguese left, and uncovered in modern times. 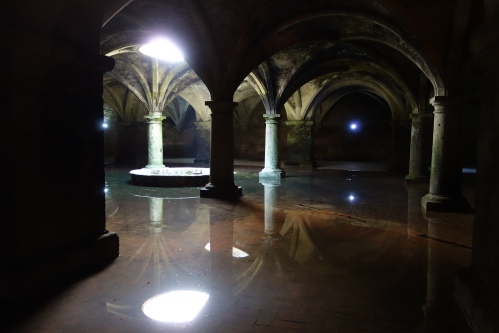 It’s beautifully atmospheric – we’ll have to watch Orson Welles’ 1952 Othello which was filmed there – and there’s a crystal clear reflection of the opening to the sky, which I think I finally caught.

We walked along the ramparts, enjoying the views of boats,

the old building and the occasional satellite dish, then back through the town to the car.  On our way out we were a bit confused, and what should happen but that a nice man pulled up, asked where we were going and gestured to us to follow him.  Which we did, along a road that skimmed the beach and turned south. At one point he jogged right and we continued straight on, but he caught up with us again, led us farther, and then gestured to us to pull over.  He advised us with big smiles to go straight on (tout droit) and gently (tout douce) and with handshakes all around we said farewell.  And he was only the first of several gentils hommes we have met so far.

Our goal was the town of Oualidia, famous since the 1950s for its oysters which are farmed there.  We meandered through town until we came to one of the recommended restaurants and there, in the tiled room with blue paint and windows open to the blue sky, we enjoyed baked oysters (raw are a bit iffy) and sparkling water.  Delicious! 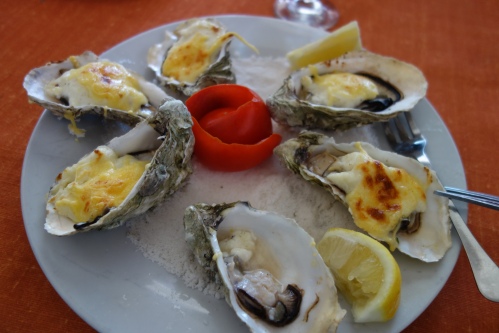 Now we had to go on to Essaouira where we will be spending three nights.  Phyllis took over the driving while Biffy dozed in the back and I did my best to remember that I was navigating.  There are road signs but never route numbers so you simply look for the signs for the next town and hope for the best.  Along the way were the most spectacular (have I already used that word?  Get used to it!) views down to the ocean.  We saw lots of truck gardens, carefully fenced with reeds against the wind, with rich soil that produces the crops we saw being brought to the roadsides for sale.  Carrots, peas (perhaps), cabbages and who knows what else were beautifully displayed in roadside stands.  Meanwhile, the waves crashed on the shores below.  It was reminiscent of Big Sur except not so golden.

It was a long trek for the sleepless, but we finally spotted Essaouira.  Just as we turned onto the long downhill stretch to town, what should we see but gendarmes gesturing us to stop.  Poor Phyllis ended up with a speeding ticket for going the equivalent of 42 mph in a 36mph zone.  Life can be so unfair! But, again, the gendarmes were so gentils that it was almost okay.

We parked the car, engaged a man with a cart to carry our luggage, and made our way to Les Matins Bleus, our riad for the next three nights.