We picked up the car in the far reaches of Cardiff, and the nice young man assured us that we would be fine.  The first twenty minutes are always the worst, trying to judge how much car looms out to your left, and how close to get to the center line without going over it.  Oh, and the roundabouts.  But most of our route was on theM4, a dual carriageway, or, as I heard him say, a “jewel carriageway.”

We proceeded on to Laugharne, which despite the assertions of people from Cardiff, is pronounced Larne, not Loch-ern.  The Post had recently run a story about the place where Dylan Thomas spent his last four years and where he wrote “Under Milk Wood.”  It’s a small village on the coast, winding roads that end in a small cluster of shops and restaurants, with the estuary and the castle above overlooking it all.

We made our way up a steep path 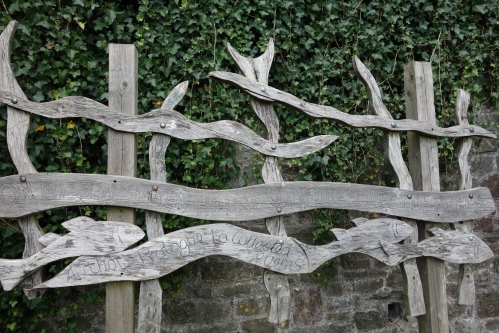 to Dylan’s Boathouse, the house where he and Caitlin and their three children lived. 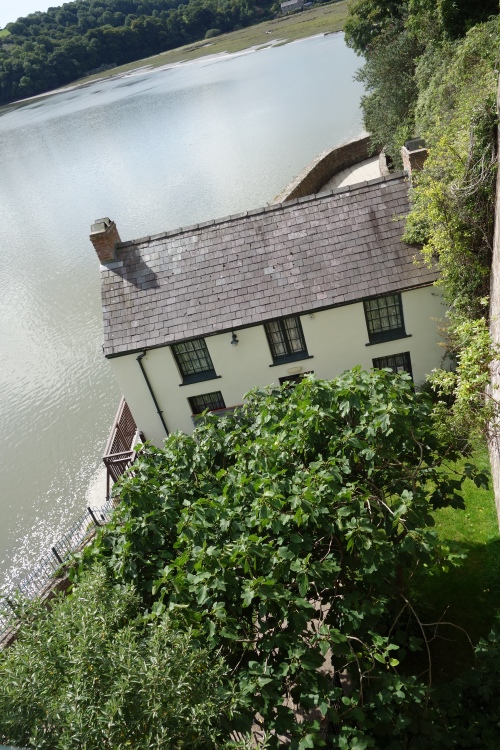 It’s currently being used for a film about Thomas, to coincide with the 100th anniversary of his birth in 2014, so there were workers building sets on the stone terrace.  The rooms were intact, though, and we watched a short film and then roamed through the parlor filled with memorabilia.  The shed where Thomas worked is perched up high, a bit down the lane, and peering through the windows you can see the postcards tacked up on the wall and crumpled pages from his typewriter strewn on the floor.  The view of the estuary is hypnotic.

We had a light lunch of lamb broth, bread and cheese at the Owl and the Pussycat, which was bustling with customers at 1:30, and then set off for St. Davids (yes, they’ve officially dropped the apostrophe).   After a complicated maneuver to get the Peugeot turned around on the narrow street, we set off up hill and down dale, getting closer to the sea.

When we got to Newgale, the road came right down to the sea, with a high wall of loose stones the only thing keeping us and the Duke of Edinburgh pub from getting drenched.

Unfortunately, my attention was distracted by an enormous truck ahead of me, too big for me to see around and pass, while the line of cars behind me just got longer.  The truck finally turned off, and we could see the sea again.  A handmade sign for St. Elvis which I thought was a joke but turns out to be a real place, then Solva, where I hope to walk while we’re here, then the national park center just outside St. Davids.

The center was beautifully designed to fit into the landscape.  We spent a few minutes perusing the books and then visited the exhibit of animal paintings by Graham Sutherland and a few others.  Then off into the smallest city in Britain.

Our B&B is well situated, though our third floor rooms mean that hauling the suitcases is a challenge (and we thought we were packing light!).  Luckily, Rob did most of the hauling.  Our room is tiny but it has a stunning view over the land to the sea.  Look closely and you will see the outline of an offshore island.

We booked a boat trip to Ramsey Island for tomorrow, then had an okay dinner at The Bishops, the big pub in the center of town.  It was filled with families, so it must be popular, but the food was not remarkable – it’s a pub, after all – though the crab salad we had was fresh.  Back up the rise to our BB, stopping only for views of the incredible sunset. 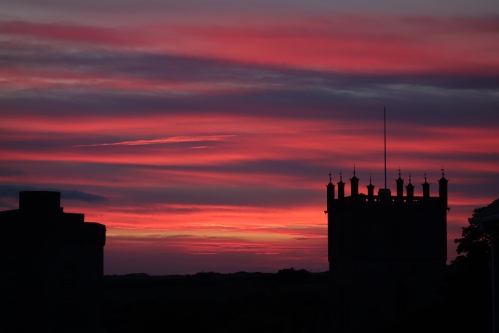