Castles and Brains and missed connections

Just one castle, actually, but what a castle!  The Earls of Bute married into Cardiff Castle, made lots and lots of money in Cardiff from coal and docks, and then produced the third Earl, who was the richest baby in the world when he was born in 1847.  Although he and his family lived in the castle for only six weeks a year, he cooked up a scheme to redo it in a highly decorative Victorian Gothic style.  Led by architect William Burges, the project resulted in rooms filled with detail and color, based on Arab culture as well as a romanticized view of medieval life.  A few highlights here.

The castle from the street 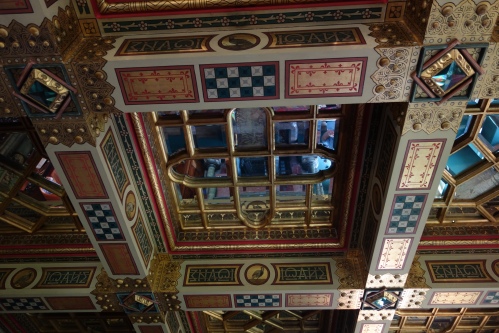 Roman terrace on the top level – there used to be a garden here, but the floor began to leak… 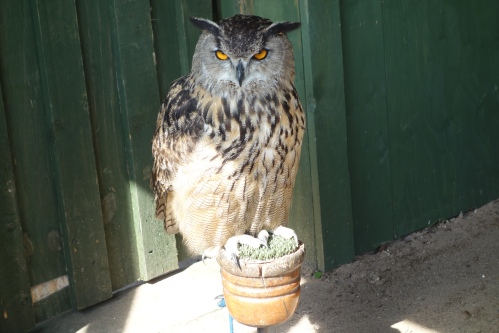 From the castle, we needed merely to cross the street to find the Goat Major, a traditional pub famous for its pies.  We were the only customers at their noon opening time, though soon enough a man came in, ordered a pint, and appeared to be settled in for the duration.  The pies were lovely – the Wye Valley, an award winner with chicken, leeks and Tintern Abbey cheese, and the ubiquitous lamb and mint.  With a half pint of dark Brains, the local brew,

We rallied our forces for the second event of the day, a visit to the National Museum.  We split up, Alison to see the art and me headed to an exhibit about the geological origins of Wales.  I soon decided that it was too much detail without John McPhee by my side, and I decided to track down a few of the top ten items on display.  The ancient fire irons were interesting, as was the exhibit on ancient life in Wales.  The silver toilet service was not to my taste, but the 19th century glass sea creatures were amazingly detailed and beautiful.  A few Monets, a few Turners, and I was done.  A restorative cup of tea in the cafe, where we observed a tart grandmother admonishing two darling little boys, and then we made our way back to Bute Park.

The plan was to take the AquaBus down to Cardiff Bay and noodle around.  But fate was against us.  The loss of one of the regular boats to “technical difficulties” meant that by the time we got there, we were last in line and couldn’t get on.  Plan B was to ride the hop-on hop-off bus, but the kind driver told us we’d be wasting our money for such a short trip and advised the public bus #6 (as the boatman had also suggested).  We got four different stories about where to get the bus, but we finally figured it out and rode down to Mermaid Bay.

This whole complex is the result of the Barrage, built about ten years ago to get rid of the “stinking mud flats,” home to thousands of wading birds, and enable development.  The young woman in the visitors center admitted that she had been against it when the Barrage was first proposed, but after all, she now had a job there. She did say that no one had told the birds where they were supposed to go once the mud flats disappeared, so who knows how they are faring.  Another plan to build a second barrage at the mouth of the Severn River is now being proposed as well, and it sounds like a terrible idea.

We wandered along the path that circled the one-time Docks building, now a public building; the amazing architecture of the Synedd, where the Wales government meets (I think),

and the Millenium Center;

and the Norwegian Church.  There were apparently a number of Norwegians who settled here in the 19th century, and this is where Roald Dahl was christened.  Just beyond was the Dr. Who experience, but it was closed…

Back on the number 6, foiled in our dinner attempt at the Potted Pig, redirected to the Meating Place with its hooks for hanging kebabs (they insert the hooks into these holes poised right above your table),

and a delicious dinner of cod with razor clams for me, and a mixed kebab for Alison. Yum! And so to bed.

One response to “Castles and Brains and missed connections”