Driving to the Cotswolds, and a muuurderr??

Leaving Oxford on a bright, clear day, we picked up a little white Golf to carry us to Stow. Our first goal was Blenheim Palace, but Alison got an email from them saying that because of an “incident” they would not be opening until lunchtime.  Since the park was still open, off we set.

The driving was not too bad, despite a few times retracing our steps and breathing heavily.  But now we were told that the palace would not be opening until 2:00 (still no explanation, but you can see the police tape).  After a look around the shop, we picked up a picnic sandwich to eat under a tree before our stroll around the park.

The park, meanwhile, was updated by Capability Brown in the 18th century and is just as lovely as can be. Passing over the Vanbrugh bridge (so large it contains 30 rooms!),

we came to yet another Harry Potter tree, a cedar which has been propped up to keep it alive by the skin of its teeth.  (This is the one that Severus Snape hung from in Order of the Phoenix, when he was being bullied by Harry’s father.) 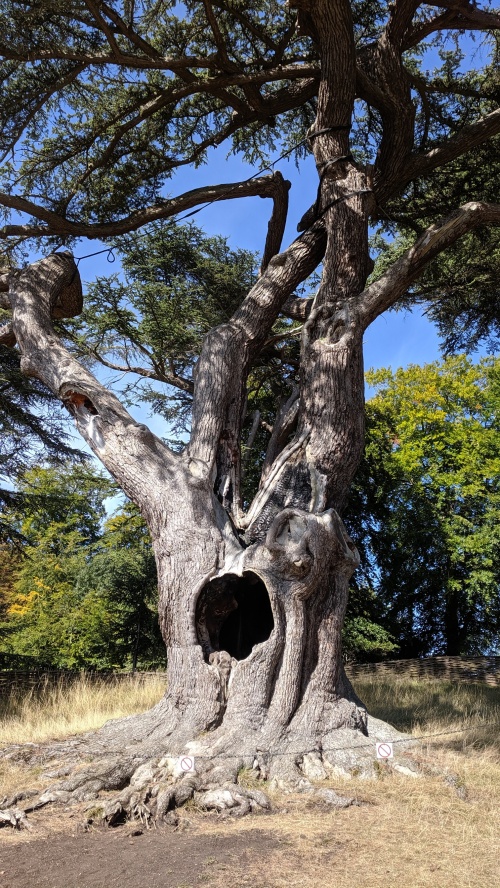 You can see that it is carefully preserved from any rabid fans who might be tempted to try the same.

As we walked along, we got a good glimpse of the Column of Victory, erected in memory of the Duke of Marlborough’s victories at war.   Here is is, charmingly accompanied by a herd of sheep. 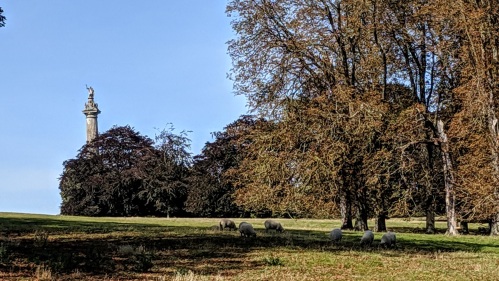 From here I continued around the Queen’s Lake while Alison went back to the shops. Gorgeous views, magnificent trees, thank you, Capability Brown!

At this point we were told that they would not open today at all but did extend our tickets through the 20th if we decided to return.  Still no word on what the “incident” was, but Alison discovered it when we got home.  No, it was not a muuurder, it was a theft! Of a golden toilet (part of an art installation, see more further on)!  As of last fall, its fate was still unknown, though there’s plenty of speculation.

Despite losing the way twice, we made our way to Stow in just a few hours.  Luckily, people are very helpful with directions. But finding the house was a nightmare.  We kept circling around Stow’s High Street, with people close behind us all the way, and finally found Shepherd’s Way.  It is a tiny, narrow passageway that set the car to beeping because it was so tight. No room to park whatsoever!

See?? We parked in the next street just beyond, and thanks to friendly neighbors who encouraged us to find our house, we had the strength to pick up our groceries and bags and go back along the narrow alley in search of Carter’s Cottage.

It turned out to be a delightful little house about midway down on the left, with two tiny terraces smothered in roses, Japanese anemones and honeysuckle.

It’s just two up, two down (mostly) but with a really good bathroom and a washer/dryer (mysterious like all British appliances, but we made it work).  Here’s a look at the cottage, which suited us down to the ground. 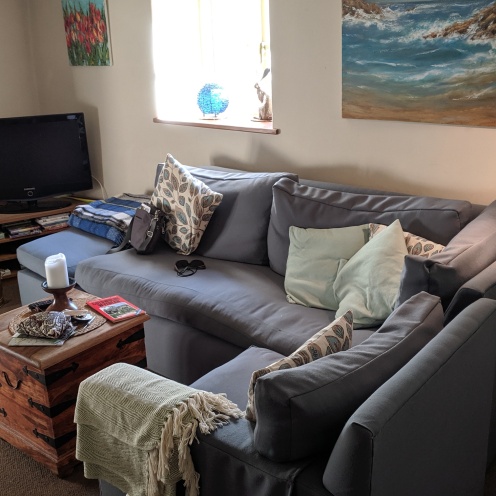 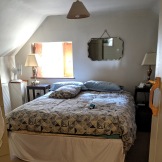 We had a glass of wine on the terrace 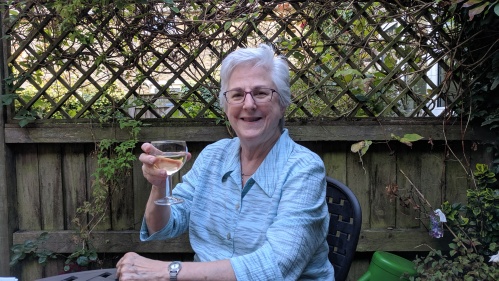 and then had a delicious dead chicken from Tesco, along with a salad and shortbread for dessert, which we seemed to need.  Looking forward to a real shower, that does not require standing up in a tub or kneeling!

This entry was posted in England, other people's gardens, roses. Bookmark the permalink.