There is so much to see, and we have so little fluency in Spanish, that we have booked lots of tours on this trip.  Too many? Time will tell. Today we started off with a walking tour of the lower Albaicin (another World Heritage Site on the list!) and the old city with Senna, a delightful young Belgian with impeccable English and what sounded to me like a perfect Spanish accent.  He began by explaining the history of the Muslims in Spain and pointed out that, as I have discovered, if you are a progressive you tend to think that the three religions coexisted happily, and if you’re a conservative, not. He led us up steep streets lined with shops just like in Morocco, offering leather, textiles, jewelry, etc.  We stopped at the top of a hill at a Catholic church run by the Clare Sisters, who pray unceasingly. And indeed we saw a white-clad figure, immovable in front of the altar, and a similar figure took her place as we watched.

Everywhere we went we saw pomegranates, the symbol of Granada.

Narrow streets, some made narrower because people had been allowed to extend their houses into the streets as long as they left room for a man and a donkey to pass.

And when the Muslims were expelled, Christians took over their houses and turned them into spacious buildings with gardens and vineyards. We ended this part of the tour at an overlook where we could see the Alhambra and the white palace.

Walking back down the hill, we came to Plaza Nueva and admired the Christian church with Muslim elements (notice the tiles and the arched windows). 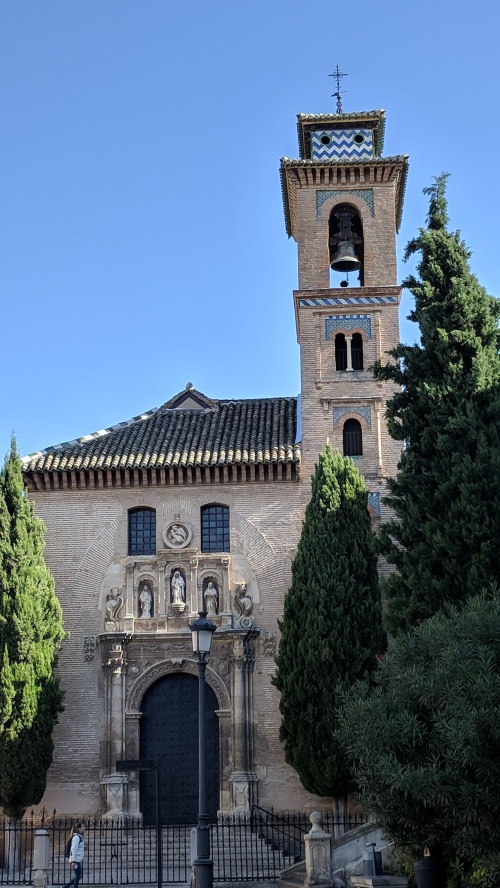 Down the street we came upon a massive monument to Isabella and Columbus (they are buried in Granada),

then we turned down a side street to the souk, reconstructed after a nineteenth century fire, thanks to the romantic admiration for the Muslim era (due in part to Washington Irving’s Tales of the Alhambra). 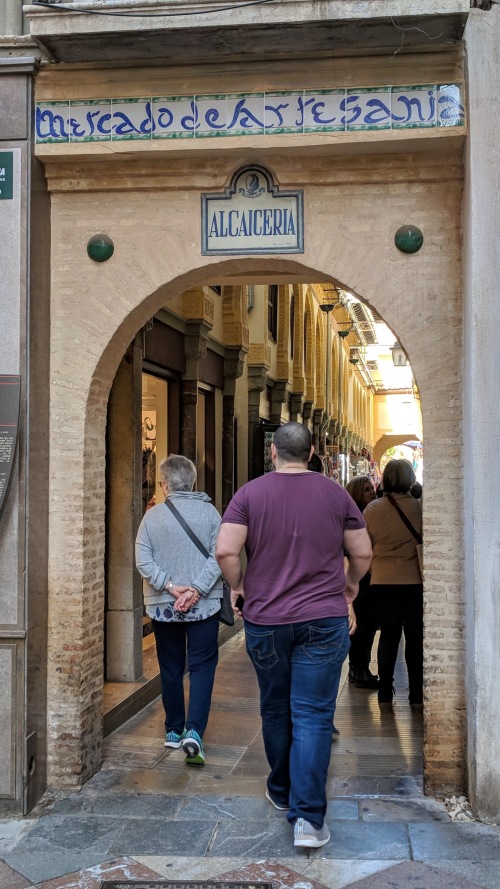 We wended our way through the narrow streets to the cathedral, a Gothic presence in the midst of everything else.  Off to one side is a building used by the University of Granada, that has preserved a room of the original 14th century madrassa, complete with mihrab.  This was, again, just like Morocco.  I couldn’t resist several photos.

As we walked back towards the cathedral, we noticed this wall with someone’s name partly obscured by red paint. 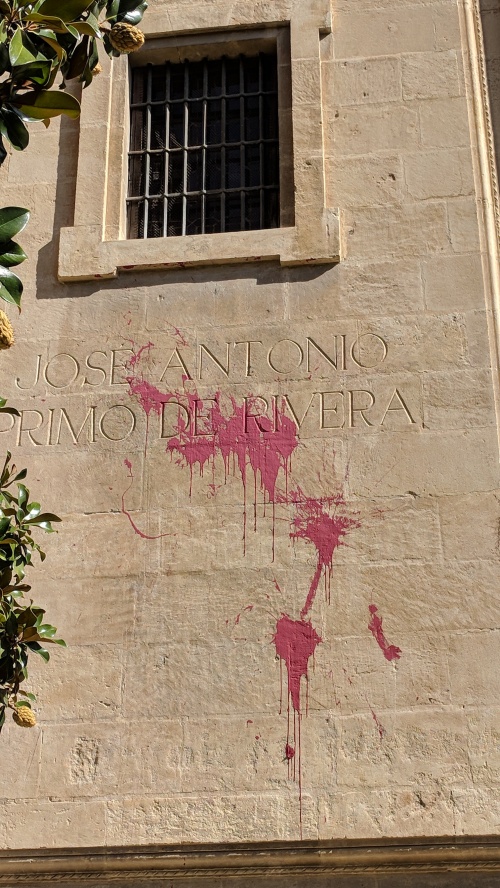 Senna lowered his voice in deference to the many church people who might be passing by (we were opposite the archbishop’s palace) and explained that this was the name of a noted Fascist active during the Civil War, honored by the church but to this day abhorred by many.

We left Senna here and walked back to the Plaza Nueva for a pizza lunch and a brief rest before our afternoon tour of the cathedral and chapel. Our guide for just the two of us was Violetta, whose English was wonderful though sometimes oddly pronounced (as is my Spanish, I’m sure).  More about the tour here.

Dinner tonight was at La Fontana, a tapas place just around the corner from our hotel, facing the Rio Darro.  We are still tapas novices, as evidenced by our behavior: we ordered wine and a hummus tapa to start and were surprised to see two little containers of couscous arrive.  We tried to take it back only to learn that this was the tapa libre! Lo siento!! It was delicious, as was the hummus we ordered. All the tapas here were so good that, even though the waitrons as aways do not like to deliver the bill, to Alison’s frustration, we vowed to return tomorrow.

This entry was posted in Spain. Bookmark the permalink.