The Heart of Rome, but first, a crisis 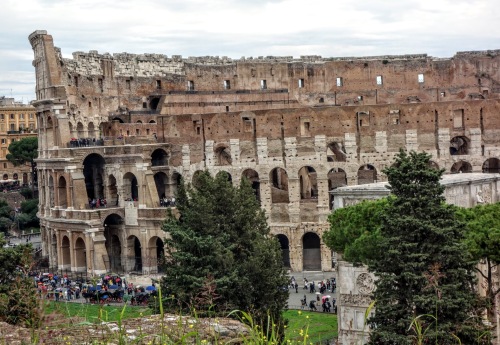 Today began with a crisis:  because there is no cell service inside the apartment, Alison tried to open the front door to go outside to the courtyard and check her messages.  The front door was locked, of course.  Uh-oh!  The long elongated key broke off inside the lock, leaving us locked in with no way out.  And having no cell service made it impossible to call Lucia.  First we emailed her, and then we had a brainstorm: we went up to my room, which overlooks the courtyard, and leaned out the window, where luckily Alison (but not me) had cell service.  We tried to explain on the phone what had happened, and the wonderful Lucia promised to come as soon as she could. However, she was afraid that only the locksmith would be able to help and he was not available until 8:30 or 9:00.  Meanwhile, this morning we had a Colosseum tour starting at 8:30.  We frantically emailed the tour hoping to be able to reschedule.

Lo and behold, Lucia turned up in about 30 minutes and just put her key in the lock from the outside, which caused the broken bit to slither out and fall on the floor.  You can see the remains at the top of the picture, and the truncated key on the left. 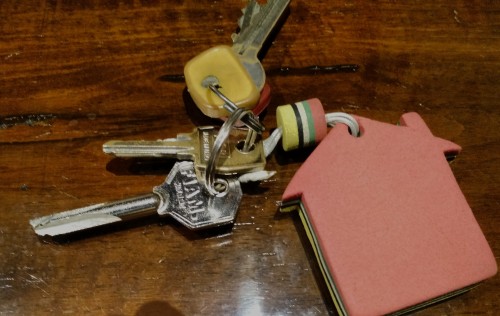 She gave us a replacement key, carefully explained how to use the key CORRECTLY and with no recriminations whatsoever left us to get ready asap for the tour.

We arrived at the Colosseum Metro stop via taxi (too worried to wait for the bus, which we just barely missed) and it turned out that we were the only ones – a private tour!  Andrea had a heavy accent but was very knowledgeable and friendly.    He led us into the Colosseum and, well, there we were. 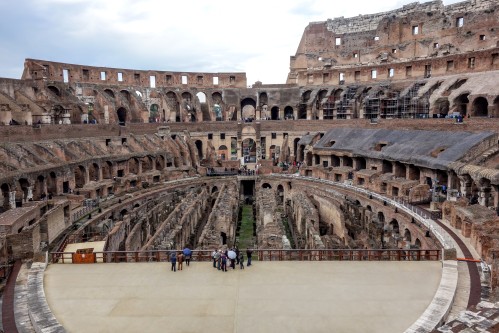 Looking down at the arena, we could see the reconstructed floor over part of it, while the underground areas where performers and animals stayed until needed were just beyond.  (An underground tour of the Colosseum is available and would be interesting for those who want all the details.)  I was glad I had read Mary Beard’s book about the building, its meaning, and how it actually worked.  What I remember most, aided by Andrea’s commentary, is that it was designed for quick exits (literally a vomitorium); that women could sit only at the tippytop; that there was a nineteenth century fad for visiting the Colosseum by moonlight and reciting poetry; that the life of a gladiator was not a pretty one; and that the logistics of obtaining, transporting, and maintaining wild animals was, to say the least, daunting.  Andrea filled in the blanks and gave us enough time – but not too much – to linger over a few details, including this section of original brick flooring. 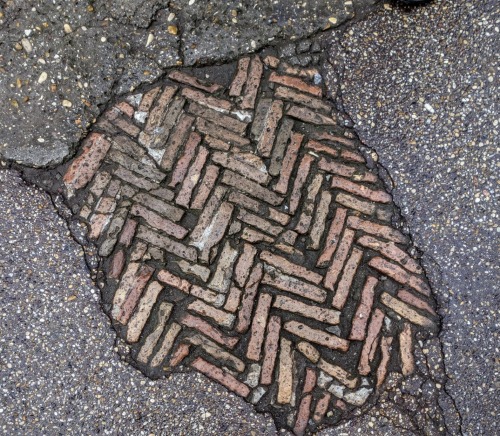 There was only a little bit of danger: 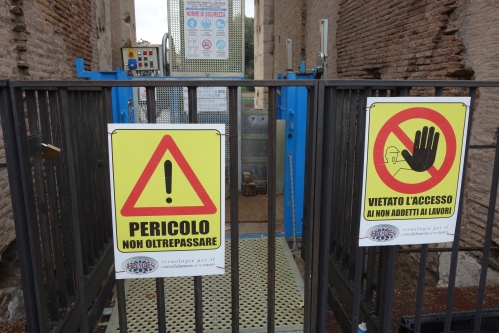 Leaving the Colosseum we made our way past the Arch of Constantine, the last triumphal arch built in Rome and, like so much in Rome, made up partly of bits from other monuments. 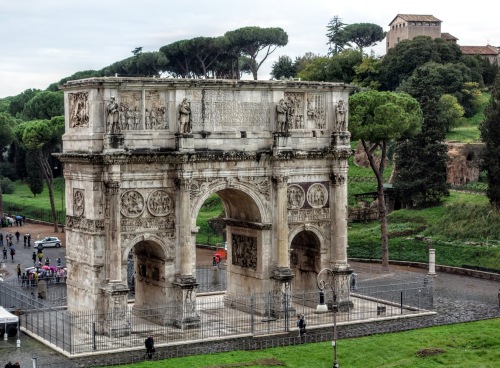 From here we walked up the Palatine Hill, which is one of the earliest inhabited places in Rome, but now home to the ruins of imperial palaces (plus some sort of temporary art installation). 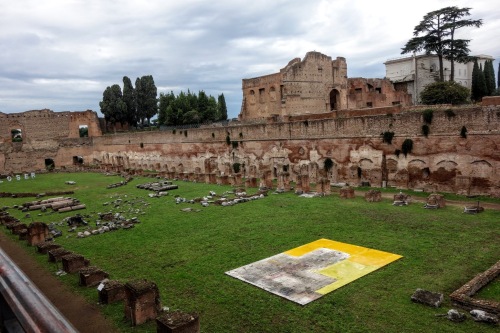 We wandered along, seeing very few other people but some beautiful trees (maybe an Atlas cedar?). 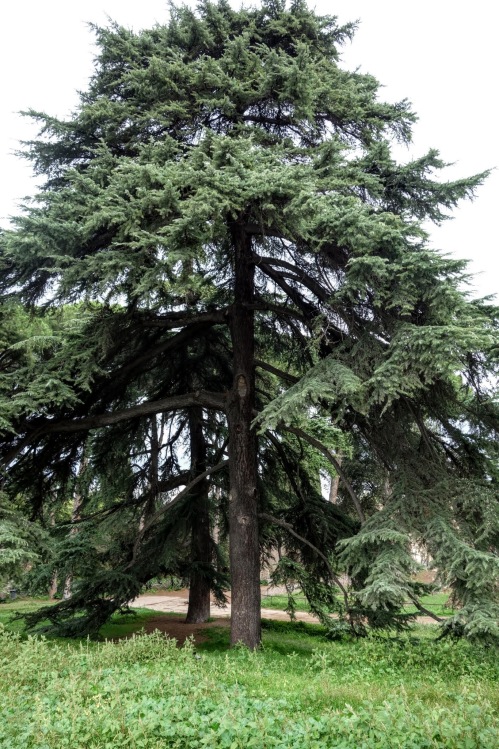 We headed downhill to the Forum, where it all made so much more sense than reading about it ever could.  First off, the Arch of Titus, commemorating the siege of Jerusalem.  See the menorah? 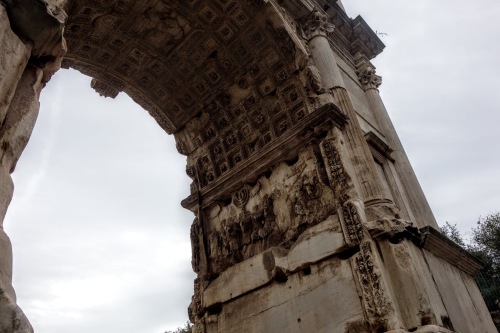 Then one monument after another (but not in a boring way), including the lovely garden and temple of the Vestal Virgins (they took a vow of chastity, and those who strayed would be buried alive). 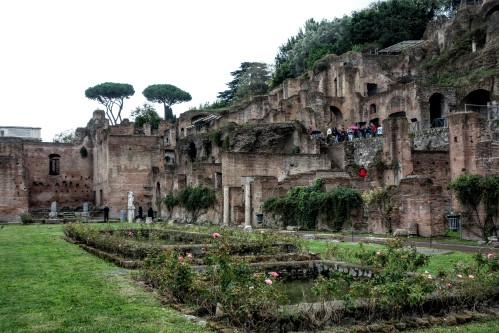 The temple of Antoninus and Faustina is quite imposing, 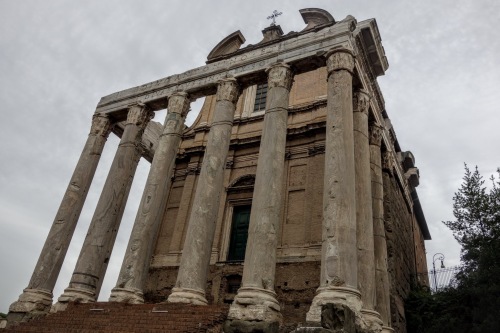 and it has a striking bronze door.   At the time it was used, they say, the door was at ground level but excavations later have left it suspended in space. One reason so much of it survives is that the temple was turned into a church in the Middle Ages.

This beautiful doorway is from a neighboring temple… 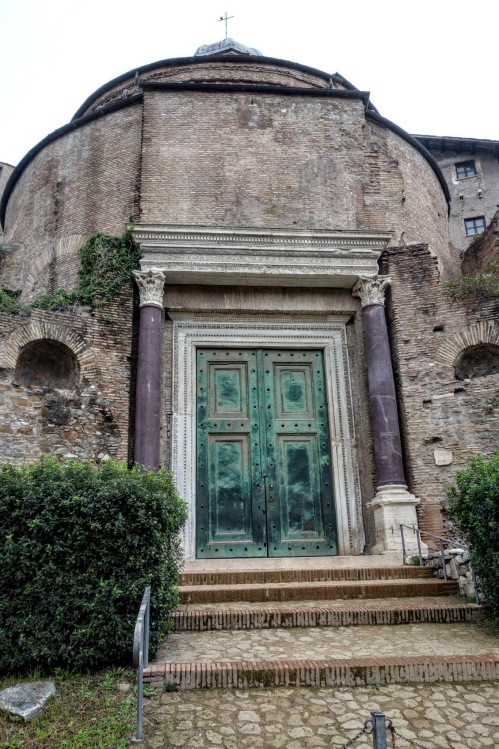 We enjoyed walking and talking with Andrea, but it was time to say goodbye.  It had been a bit drizzly all morning, and we were stripped down in anticipation of the Colosseum’s new rules about no backpacks (exaggerated, as it turned out).  Plus, it was not supposed to rain!  But rain it did: as soon as the tour ended it began to stream down.  We darted here and there trying to make our way out of the Forum, buying an umbrella on the way from one of the men who magically appear in Rome when it rains, but it was our second trap of the day.  Every path was a dead end.  Hither and yon we struggled in the rain until FINALLY we found the exit and took refuge in a nearby restaurant for restorative vegetable soup and a margherita pizza.  It was not photo-worthy, but it hit the spot and gave us the strength to go on, or at least have a rest.

Since the nearby churches were closed for another two hours, we took the bus home and had a little lie-down to restore ourselves.  After that, we valiantly bussed to San Clemente, which is famous for its many layers of religion.  One of the earliest is the Mithraic Temple, from a cult much favored by soldiers (there are Mithraic remains in London, for example). The remains are, of course, underground, with many stone corridors, steps and mysterious stone altars.  Unfortunately, the signage was not very illuminating but we checked it off the list.  (This would have been a good candidate for a guided tour.)  I was most taken with the tile floors on the main level.  More quilt patterns! 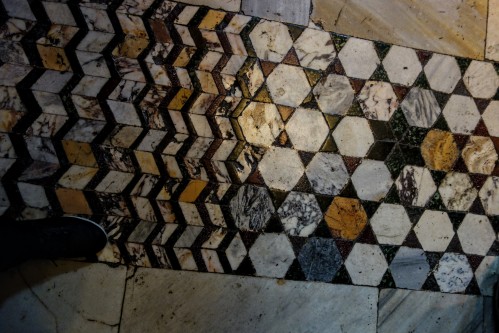 From here we trudged up a small hill to the church of St. Peter in Chains.  This is famous for housing the actual chains (!) that held St. Peter when he was jailed,

as well as the Michelangelo Moses. 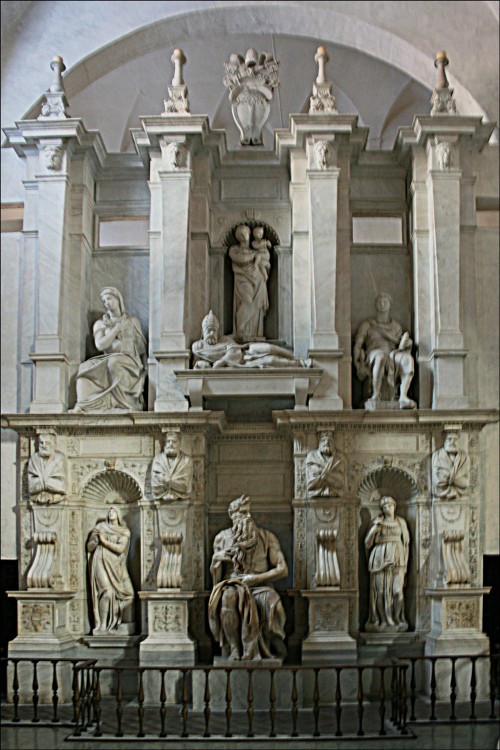 The latter was covered in scaffolding while we were there so we had to crane our necks, but here’s what it looks like normally.  (Both photos from the web since I failed to take any pictures.)  From here we walked down to the Via Fori Imperiale for the bus home, the 76 as I remember, which has become our old friend.

After a quick drink and a peek at the news (CNN International, so we cannot escape Trump), we meandered over to the Campo for dinner and some delicious fish. 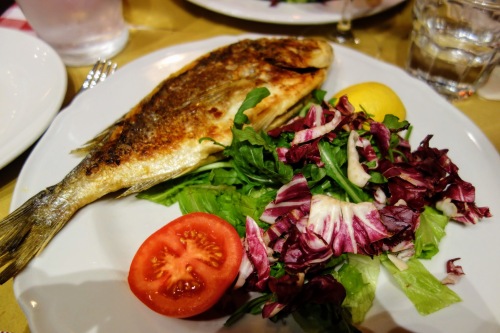 And so to bed.

This entry was posted in Rome. Bookmark the permalink.