Over the last few years, the supposedly squirrel-proof feeder I had became less and less satisfactory.

It was a good one from Droll Yankee, but it never really worked all that well.  First of all, the squirrels quickly figured out how to work around the baffle and helped themselves. See the bite marks on the edges of the baffle?!

Next, it attracted only some of the birds and I wanted to expand my scope.  Finally, I had an old hummingbird feeder from Dad that was hard to clean and had lost a few parts that I had to tape on.  Time to move forward!

The young guy at Roxbury Mills recommended two feeders, one for thistle seed and the other for sunflower seed and supposed to be squirrel-proof.  I also picked up a simple hummingbird feeder.  The results have been great, despite a few bumps in the road.

Here are the thistle and seed feeders, hanging from a new shepherd’s hook. 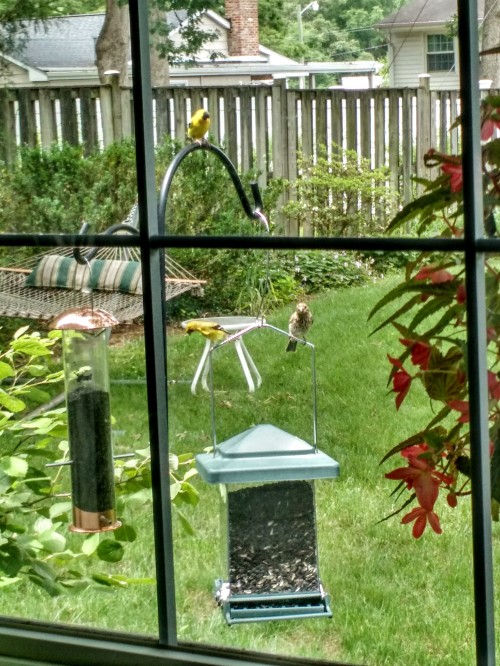 You can see that the goldfinches have found it!  Also the house finches.  Here’s a close-up of them actually feeding.

So far the visitors have included Mr. and Mrs. Goldfinch, Mr. and Mrs. Housefinch, chickadees, tufted titmice, cardinals, and  a nuthatch that swoops in from climbing upside down on the oak tree.  On the ground below I’ve seen mourning doves, a brown thrasher, robins, and white-throated sparrows.  Nothing out of the ordinary, but such fun to watch.

However, I have also managed to attract two pests, squirrels and cats. The perch on the sunflower feeder closes up if enough weight is on it, theoretically deterring squirrels. It took the damn squirrels less than a week to figure out how to put all their weight on the pole so that they can get to the sunflower seeds.  I try to shoo them away but it’s really useless unless I want to sit there all day with a BB gun on my lap.

The cats are my neighbor’s free-range cats.  More than once I’ve noticed an ominous silence and when I’ve looked the window have spotted the orange and white cat sitting patiently below the feeder, waiting for a SNACK.  Not on your life, buddy.  I plan to invest in a spritzer and stand ready to spritz him with water the next time I see him.  Yes, I know this is a losing venture, but it might give me some satisfaction.

On a happier note, the hummingbirds have found my new hummingbird feeder!  I can see it right out of my kitchen window and have had lots of fun watching them.  Unlike the feeder’s on Kristi’s deck in Vermont (seen here sans hummingbirds, but what a view!) 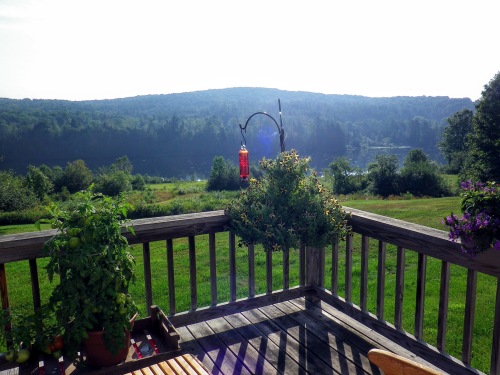 my feeder attracts only one at a time.  In typical fashion he (sometimes) or she will zip in, sip either while fluttering or, something I didn’t expect, perch and sip.  Here are a few pictures thanks to the burst feature on my camera. 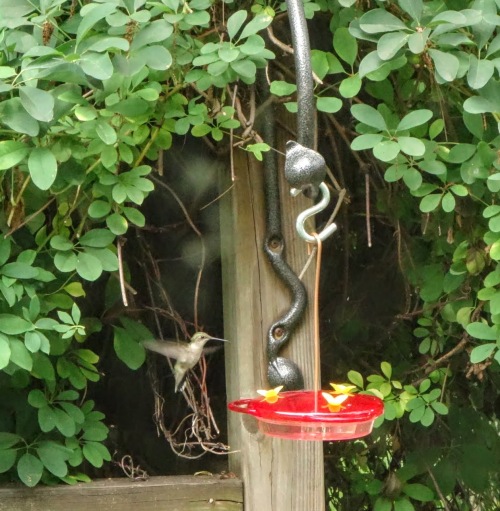 This is the Mrs., without the ruby throat, hovering until she can find the right spot.

And here she is feeding.  I’ve also seen her husband, whose brilliant ruby throat is visible for a fraction of a second as he flies away.  I have my camera right by the kitchen window in hopes of getting a better picture.

I’ve also bought a second, window-mounted hummingbird feeder, but it may be poorly sited.  I’ll play with its placement a little and see if I can get some good close-ups once they find it.

This has been a ridiculous amount of fun, despite the swearing at pests.  I may just add to the feeders until the place looks like a scene out of The Birds.

This entry was posted in wildlife. Bookmark the permalink.