Well, yesterday we went to museums, too, but today was all about just two more, the National Galleries of Art and of Archaeology and History.  We walked at a leisurely pace down to the first one and went through their somewhat truncated collection.  (Note that the centeeenary, as they say, of the 1916 Uprising is next year, so everything is being renovated in preparation.)

One of us is chasing Vermeer, so that was the prime focus, 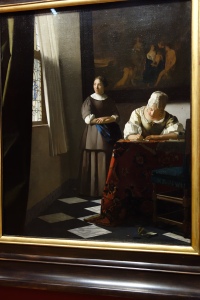 but we also enjoyed visiting old friends like the Dutch painter Averkamp with his cheerful winter skating scenes, and a bit of Fra Angelico and Caravaggio. An annunciation is always good, too.  A Scottish portrait by Raeburn of a middle-aged couple was particularly pleasing (see also the skating minister painting in Edinburgh).  We had to see the Jack Yeats paintings, too, in honor of his brother.

Since we were there we went into the Sean Scully exhibit although neither of us had ever heard of him and knew not a thing about him.  He proved to be a treat:  Color Field paintings (though he calls it Wall of Light) that reminded me of quilts, 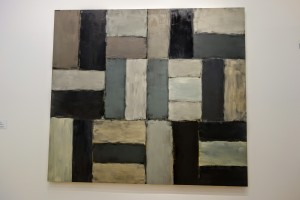 and stark black and white photos of stone walls on the Isle of Aran.  He’s an Irish-born painter who seems to be living mostly in London and New York these days.  Good enough that I had to buy the book.

From here we walked to Merrion Square, home of Wilde, Yeats and others, but we ignored the blue plaques on the houses and made straight for the Oscar Wilde statue installed in the park in 1997. 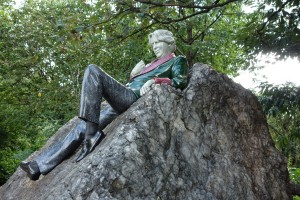 Having paid homage, we walked on in search of lunch, enjoying a few Georgian doorways along the way.

O’Donoghue’s, where we had lunch, was filled with men drinking beer and watching a soccer game.  I think this was just a warmup for the Hurling World Cup game to be played against Wales later in the afternoon.  We each had a glass of beer, half-watching (and not understanding) the game as we ate our ham-and-cheese toasties and enjoyed the (smoke-free) atmosphere of a local pub.

Thus fortified, we walked (boy, have we been walking) to the Museum of Art & Archaeology.  Weary but game, we hit the highlights, starting with the bog people.  I really love the bog people, I guess because they are so real and so informative about ancient times. The latest find was from 2003, when a peat digger found yet another body cut in half by the digging machine.   They are still able to find out all kinds of fascinating details about these people, of course. One had a very special hairdo, short on the sides and with his longer hair tied in a topknot.

Golden lunulae and torcs, intricately filigreed brooches and crosses, and finally a newly discovered manuscript as old as the Book of Kells.  Again, found by a turfcutter and discovered to date from around 800.  Not heavily decorated like the BOK but amazing for what it explains about medieval bookmaking.  The best thing is that the turfcutter immediately knew it was important and the landowners called the museum right away, because that’s what you do in the UK and Ireland!

Totally exhausted by now, we dragged ourselves home via Grafton Street and the closed Bewley Oriental Cafe where I had hoped to see the stained glass windows.  Next year…  Then home for a toes-up, sorting and packing, and getting ready to tackle left-hand driving tomorrow.

One response to “Museums day”