A Day in the Country

In Friesland, to be exact.  We took a day trip in memory of Pat, who always told us that Friesland, where his family comes from,  is NOT the same as the Netherlands.  Plus, Judy told me how beautiful it was, so we went.

We rented a car at the airport, neglecting to bring our passports, since we usually travel with photocopies and leave the originals in our rooms.  Luckily, the nice car agent assessed us as harmless if gormless old ladies and allowed us to proceed without the proper documentation.  Whew!

Since the Dutch sensibly drive on the right side of the road, the trip was not difficult.  We were traveling north of Amsterdam and slightly east, up the narrow peninsula that used to end in water.  Since 1932 when Afsluitdijk was built, there has been a causeway between the Zuider Zee, a salt water inlet of the North Sea and the IJsselmeer, which is fresh.  Can you tell I got these details from Wikipedia?

Here is the engineer who made it all happen but died before the dike was completed.  He looks a lot like Churchill.  You can see the two bodies of water separated by the dike.

Building it was a heroic endeavor, and to honor that work is a statue of a young man laying the stones that make up part of the dike.

The whole thing is quite a tourist attraction, with a layby offering coffee and snacks (stroopwaffel) and a walkway to the other side.

There are also informative signs about the differences between the saltwater and freshwater environments.  But my favorite was this one:

Indeed, we managed not to get lost one bit!

We went to Makkum, highly recommended by Judy as a charming little village.  It was indeed, though mostly shut up tight on a Sunday. 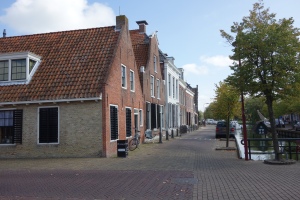 Luckily, we found a restaurant serving pannekoeken.  We chose the savory – apple and cheese – and they were so delicious we could hardly stand it.

We sat outside in the sun, enjoying our lunch and watching a very few people go by.  Though, of course, that included cyclists…

Then we had a wander, enjoying the canals

and this little house that someone explained was for pigeons. 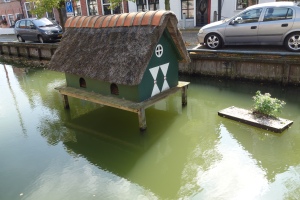 We liked looking in the windows, which in the Dutch way are often wide open day or night, inviting you in. 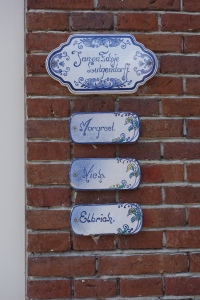 We also enjoyed this family listing outside one door.  The old-established pottery in Makkum  had closed its shop a year before, although if you have lots of lovely money you can visit them online or even commission something.  So we gently moved on.

We had a tiny bit of trouble finding Hindeloopen, since in the English style the Dutch tell you what the next village is, but not the next but one.  That gave us a chance to snag some windmills (both kinds), sheep and enormous Dutch skies.

Here are the sheep “in action.”

Hindeloopen is known for its painted furniture, but it is also just a charming place.  We came across this painted door

and saw this chest in a nearby store. 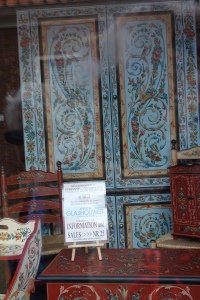 Apart from these charms, Hindeloopen also had lovely gardens

and, best of all, a wonderful dike to walk along.

First we walked down to the harbor, where the phrase “a forest of masts” must have come from. 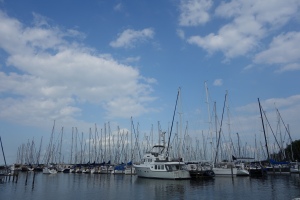 Then we walked around the town to the dike.

It really is just an embankment that keeps the sea away.  You climb up a small hill, walk through a stile, and there you are.  This scene could have come right out of a 17th century Dutch painting.  I don’t think much has changed.

There was nothing to see on this sunny day but sky, sea, sheep and the Dutch at play.

We paid a brief visit to the Commonwealth graves outside a church, marking the anonymous airmen who died here during the war.

Then it was back down the road, across the big dike, and home again.

This entry was posted in Amsterdam. Bookmark the permalink.