Actually, just trying to photograph insects in hopes of identifying them later.  It’s much harder than it seems when you see a bee sitting tight and gorging itself on pollen (or is it gorging on nectar?  see, I really need a book), ready for its close-up.  First you have to get it in focus, then you have to take several pictures in rapid succession (I used the burst feature on my camera), then you look at them on the computer and realize that most of them are either sans bee or out of focus.

I got to the bees through this book, 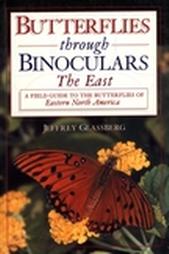 which I’m enjoying despite its 1999 copyright and outdated info on taking photos.  Glassberg is an expert and an enthusiast, and it shows.  The introductory material on how and where to see butterflies and how to pay attention to them is quite illuminating.  Since butterflies come to life in sunshine, it’s mid-morning here before they are active in the front garden.  I think I’ll need to make note of the most common ones and start there.  Lots of skippers, in other words.

The butterfly book inevitably led me to need a similar book on moths and one on bees.  There’s a new bee book that I have my eye on, and here’s why. 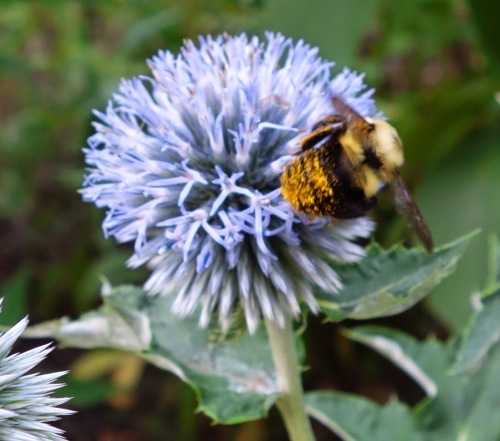 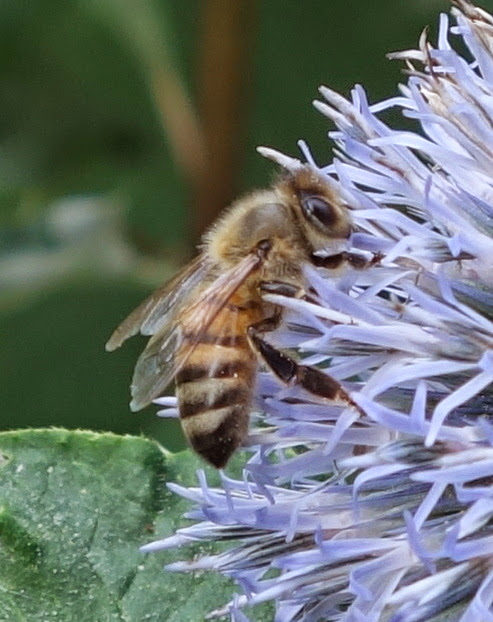 I can tell that these is bees, but that’s all I know.  Hence the need for this book:

It is even now winging its way to me.  As it were.  As for moths, there’s a newish Peterson guide, but it covers northeastern America – not sure if that matters here in the southeast or not.  In the meantime, I’ve place the Covell guide on hold from the library.

All of this led me back to Douglas Tallamy’s inspiring book, Bringing Nature Home, which I now own in the revised edition.  As I was noticing the bees on the hostas, achillea, hyssop, and echinops, I also realized that I never see them on the daylilies (native to Eurasia), or the spirea (though Wikipedia tells me this is a food source for many larvae).  What I really want to do is to match my plants with the insects that feed on them, in hopes of identifying more insects.  A project for another day.

This entry was posted in book report, wildlife. Bookmark the permalink.