Where is John McPhee when I need him?

I read his Basin and Range to get ready for Death Valley, and now I wish he had written about Morocco, too.  The rock formations have been amazing.  I can only look on in ill-educated wonder.

Rock layers near the salt mine on the way back from Telouet.  I see now in looking them up that the salt mines were traditionally managed by Jews and the river (perhaps the one whose dry bed we were walking by) was named the Oued Mellah.

The monkey’s paws or fingers – The Rough Guide says “an extraordinary cliff known as the ‘Monkey’s Fingers’ rises from the far side of the valley.  The rock, a weathered conglomerate of pebbles thought to have lain where a huge river entered a primordial sea, is a startling sight…”

Somehow we missed the next bit, described by Fodor’s: “A little further beyond ‘Monkey Fingers’ are more sculpted rocks known as the ‘Valley of Human Bodies,’ where local legend says that lost travelers died of hunger and were transformed into rocks.”

Patterns in the Dades Gorge 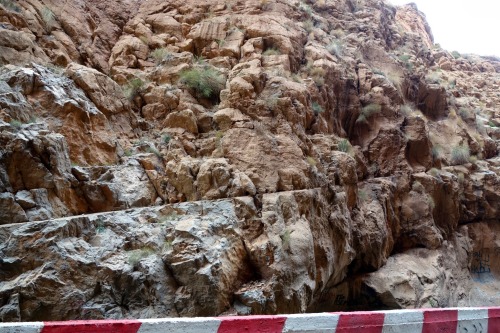 In the High Atlas 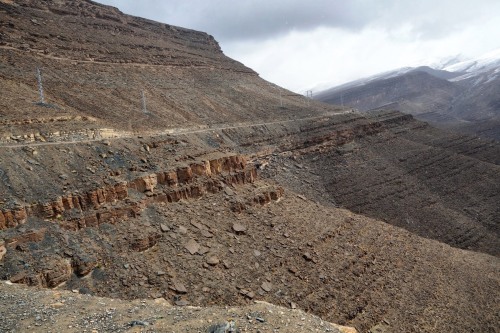 The dusting of snow really highlighted the layers in the High Atlas.  The odd little globes in the picture below are actually grasses or small shrubs covered in snow. 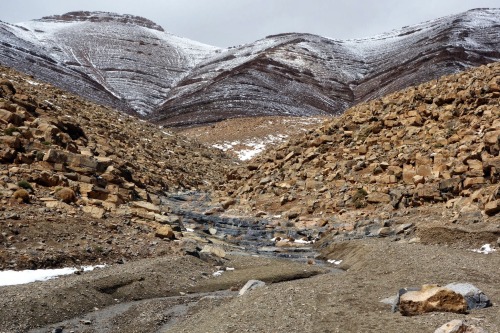 This was on our way to the Hotel Essalam, coming down from the Atlas onto a broad, dry plain.

Then there is the Middle Atlas, Atlas Moyen, with very different formations.

And finally, one of my favorite pictures of the Atlas Mountains, on our way to Fes.