Caernarfon Castle and a visit with real Welsh people

Today’s plan was to visit Caernarfon Castle, one of Edward I’s ringed fortresses built in the 13th century to control the Welsh.  This meant a trip off the island, back over the Britannia Bridge to the town of Caernarfon.  The castle is right by the river, and the castle walls are still standing, making an imposing statement smack up against the town.

While on crusade, Edward had been impressed by the castles in Constantinople, and Carenarfon reflects that style.  The walls are inset with bands of different colored stone, and the turrets are octagonal rather than round.  A good movie and a series of informative boards explained this and the larger history of the area.

The Welsh princes had been ruling their country for generations until the clash with Edward.  The Welsh prince of the time obviously underestimated Edward, refusing to pay homage to him when he was crowned king.  Edward retaliated by burning the grain fields on Anglesey, thus cutting off the Welsh food supply, and in the end the English prevailed and the Welsh were conquered.  Edward promised that one day he would give the Welsh a prince who spoke not a word of English, and this came true when his son was born, speaking not a word of English or, indeed, of any other language, and was made Prince of Wales.  Though the Welsh took the castle later on for a few months, they never ruled their own country again. 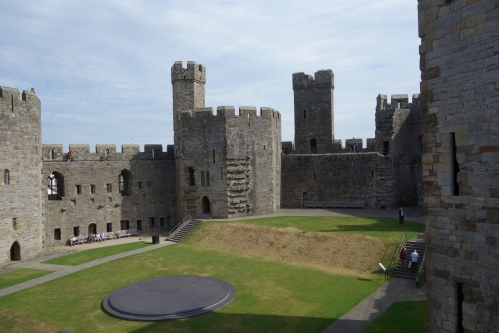 After walking on the walls and through the tunnel-like passageways, and viewing the slate stage where Prince Charles was crowned Prince of Wales, we were ready to move on.  We had a quick lunch at a cafe on the town square

and then walked back down to the river for a cruise along the Menai Strait.

The Strait was wider here than I had expected, and the wind blew hard.  The captain pointed out the fields of Anglesey, the peaks including Snowdon across the way,

and a fort  built during the Napoleonic era.  Oystercatchers and gulls could be seen waiting for the tide to ebb (in fact, he told us quite a bit about the tide since of course it matters a lot to a boat captain).   Mild and pleasant, with good views of the castle from the water.

We headed back to Anglesey for our meeting with Dewi Jones and his wife Magdalen.  Alison’s brother Proal had become fascinated with the history of Welsh poet Geronwy Owen, who had died in 1769 in Brunswick County, Virginia, where the Heartwells grew up.  As part of the research for the book he wrote about Owen’s life in Virginia, Proal befriended a retired schoolteacher, poet and Owen enthusiast in Benllch and visited him when Proal and his wife came to Wales on the Owen trail.  Alison had called Dewi and Magdalen and arranged to meet them this afternoon in Benllch.

We successfully called them from a phone booth and they drove up to meet us and escort us to their house, high on a hill above the sea.  They are both getting on in years and no longer do much driving, so they could not give us the tour of the area that they had given Proal and Susie.  But we spent a brief, happy visit with them.  Dewi is clearly a scholar.  He explained the origin and meaning of Welsh words and place names in a way that reminded me of Uncle Buzz.  They were gentle and courteous and we felt lucky to spend time with them.

Then in bustled a younger man in paint-stained overalls who offered to take us on a ride to a nearby “mountain” where we could see unparalleled views of the island.  We figured out that he was their son and gladly took him up on his offer.

First we followed him to his house nearby, where we saw gorgeous views of the Strait from his living room.  He hustled us into his little car and off we set.  I was glad that I had agreed to go with him rather than follow him in our car.  He drove fast and talked even faster!  He made his way through twisting lanes, regaling us with stories of how he and some friends had found a gigantic quartz stone that was probably used in ancient times in some kind of ritual and how they had hid it in the trees where no one else could find it, and how this little mountain was on a road that was not signposted so only the locals really knew about it.

Then we arrived, and it was breathtaking.  He started off up the trail, and Alison soon decided to stay put while I went on right behind him.  Rhys (for Alison had finally asked him his name) was right, it was glorious!  Bright late afternoon sunshine illuminated the whole island.  From here we could see Holyhead and the copper mines of Amlch to the north and west, Mt. Snowdon across the Strait, Moelfre to the east, and all around.  It took only about ten minutes to climb but somehow it was situated in such a way to provide these glorious views. 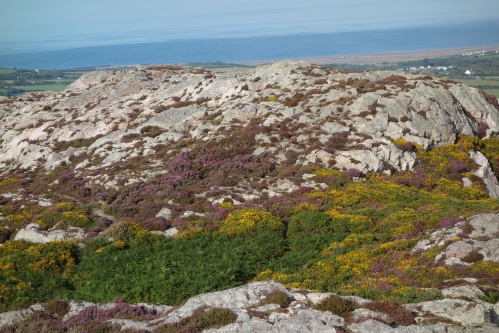 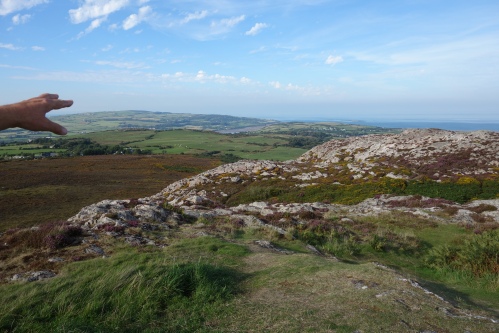 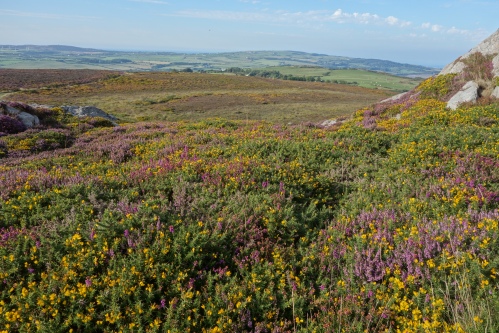 We stood there for some time, taking in the light and the landscape, and then Rhys suggested taking my picture at the top.  Done!

We returned to earth and he drove us back to his house so that he could show us some musical links.  One is to the Welsh Men’s Choir he belongs to, and he showed us a couple YouTube videos of their performance, quite beautiful.  His daughter, about to start university, acts in a Welsh soap opera that has given her enough money to buy a car and pay for two years of school, and he showed us a video of her performance singing in an eisteddfod.  Altogether, a talented family of musicians and storytellers.  What a treat to have met them.

Tonight we decided to go out to a restaurant in Moelfre that’s about as upscale as it gets here in the country.  Ty Ddrew is a converted farmhouse just up the road from our cottage and down a long driveway.  Inside was very nicely appointed, with a beamed ceiling and just a few tables taken.  We started with rabbit terrine, which was just okay, and then both chose the lamb shanks, which were delicious.  We ended with a platter of Welsh cheeses, quite an excellent way to finish the meal.  When we came outside, we caught the tail end of a dramatic sunset that seemed to embody all the Welsh mysteries Rhys had told us about. 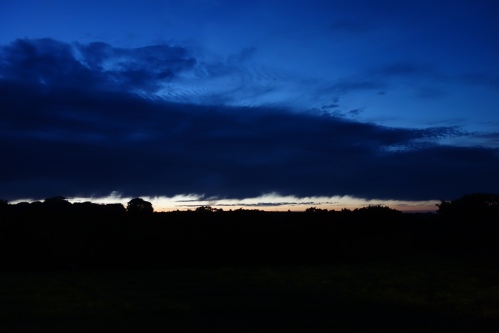