The Etruscans and their museums

This part of Italy was settled by the Etruscans, or the mysterious Etruscans, as they were better known.  They liked food and drink, and to prove it they left behind funerary urns decorated with what look like real people, portrayed lounging on couches as they eat and drink.  They also made tiny animal statuettes and alabaster vases, especially in Volterra, which is known for its alabaster.  Their language has yet to be completely deciphered.  After a thousand years of prosperity in Tuscany, they were defeated by the Romans.

A side note on alabaster:  the windows in Volterra’s cathedral are made of alabaster, letting through a milky, soft light. 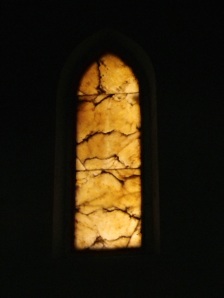 We visited an alabaster shop with attached workshop.

As you can see, everything was covered with a fine, talc-like dust.  The shop had some beautiful lamps and vases, but the message here was, buy something large, gorgeous and light-filled, or just pass it by.

Back to the Etruscans.  Volterra is known for its Etruscan Museum, founded in the 18th century by an abbot who was fascinated by their civilzation, and touted as the third greatest collection after the Louvre and London’s National Gallery.  Well, they certainly had lots of things.  Here are lots and lots of alabaster vases. 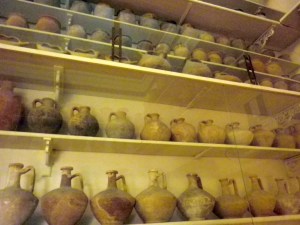 And here are lots and lots of terra cotta vases.

There were lots and lots of everything, in fact.  This museum may have had a great collection, but it was exhibited without much art.  Here are some little animals – look closely and you’ll see that one of them has fallen over.  How long ago?

Some of the object were quite oddly displayed.  Here were two funerary urns placed behind a rectangular hole in the wall.  If you peered inside, you could see the second one, but otherwise not.  What was that all about?

Still, there were some objects that really gave a sense of the culture. The funerary urns with their all too human statuary were very appealing.

Best of all was the famous Shadow of Night statuette.

Since there is currently an exhibit in Paris called “Giacometti and the Etruscans,” this was on loan and we were actually looking at a copy.  Oh, well, it was still quite wonderful and clearly must have influenced Giacometti, who saw it here in the 1960s.

Cortona has an Etruscan museum, too, not quite so extensive but much more creatively displayed.  Here are some metal pot decorations that caught our eyes.

One odd thing about these museums and most others in Italy:  once you come to the end, the only way you can leave is by retracing your steps back to the entrance. Hmmm.

This entry was posted in Italy. Bookmark the permalink.