Anne advised me to put in the hardscape first, then look at the plantings.  The hardscape she suggested for the front was such a great idea that I’ve already started on it:  extend the mulched and planted area under the maple tree out to the drip line, and make a broad path from the sidewalk between there and the existing gardens, which are extended by about two feet.  Okay, here, take a look.

This is what it looked like when Anne came.  Here’s what I’ve done since then.

I’m using the newspaper and mulch method of building these beds and don’t expect to do much more with them until fall at the earliest.  Every week I buy more bags of mulch and extend the bed under the tree just a little bit more.

The next part of the plan is to run the dry creek bed, already existing in the garden, across the grass path and through the maple tree bed, curling around the epimediums and woodland asters and ending at the driveway, thus drawing the eye very cleverly along.

One more thing Anne did was to suggest moving a few garden statues around.  Just one little change makes a huge difference. Here is the reading boy, who was dwarfed in his earlier spot by the rose.  The plan is to underplant him with Japanese painted ferns and run the dry creek bed just beyond that point.

Years ago, when Mom was saddled with a frog fetish (she liked them just fine, but the family went a bit overboard in buying them), I brought her a horned toad from San Antonio. It was living in the front garden, where it could barely be seen.  Here it is by the dry creek bed, where it stands out just enough that it’s a nice surprise when you spot it. 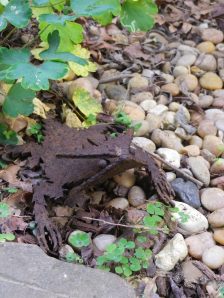 Anne also asked delicately (though she’s pretty blunt) how much I liked the myrtle around the lamppost.  We both agreed that myrtle should be rooted out of most places it appears, so she went forth and suggested making this more of a focal point. (Another example of a new set of eyes seeing something that I had clearly stopped paying attention to 15 years ago when I finally got the English ivy out of that spot.)  She recommends a boulder or several big stones in this spot. Hmmm.  Interesting – no plants at all?  I will ponder.

This entry was posted in dreaming. Bookmark the permalink.