In which we behave like the tourists we are

We got our bearings by following Rick Steves’ podcast city tour through some touristy highlights.   From Central Station, the Victorian red brick building where every journey begins, a  short tram ride along Damrak brought us to Dam Square, the center of the historic district.  We dutifully went into the Royal Palace (aka City Hall), so named by Napoleon’s brother.  The central hall was quite impressive, if you like marble floor maps and classical statues. 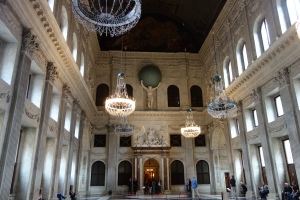 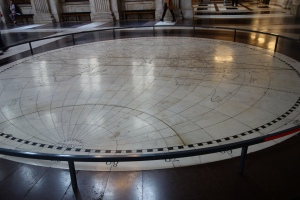 and a close-up of Atlas.  Unseen above is a painted ceiling showing Amsterdam triumphant.

Enough.  We moved on to the hidden Catholic church.  There are several of these dating from the Reformation.  This one is located on what’s now a very busy tourist street. 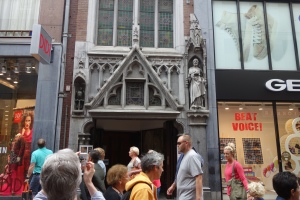 It’s known as the Papegaai,  meaning parrot, after the bird carved into a niche at the entrance.  Inside all was calm and serene in contrast to the commercial bustle outside.

Just around the corner is the Amsterdam Museum, housed in what was once an orphanage.  Sharp eyes will see the boys asking for charity in the relief above the entrance.

We skipped the museum but did walk through a glassed-in passageway exhibiting contemporary versions of the well-known Dutch civic portrait.  The classic is, of course, Rembrandt’s Night Watch (q.v.), while this photograph takes the same approach to workers at an outdoor market.

Just around the corner we came to the Begijnhof, a quiet courtyard that used to house pious women starting in the 14th century and now is home to single Catholic women (presumably there  is a difference between these two varieties?).

Here is the courtyard with the houses around, serene and quiet.   We admired the small gardens like this one, with its imaginative combination of annuals. 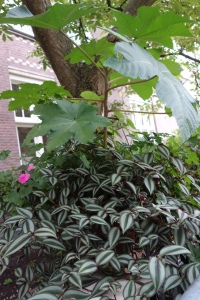 Also of note, the collection of gable stones painted with scenes from the Bible, 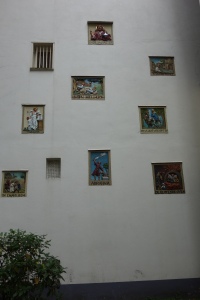 and the oldest wooden house in the city, dating from 1477.

Just around the corner – which seems to be the best direction, next to “just over the canal” – we found Spui Square.  We stopped for lunch at Cafe Hoppe, which has been here since the 17th century.

Just as we were finishing our meals, we heard a brass band start to play.  Here’s a short clip to give you a sense of the exuberance of the band and the audience.  Fun!

We continued on our walk, past the Mint Tower 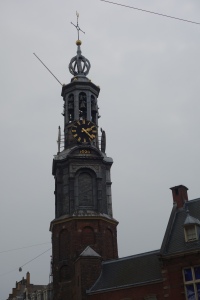 and the Flower Market, where I had to buy some Rembrandt tulips which of course I could have bought just as well at home, but there you are.  Here is my patient companion in front of one of the stalls.

Then it was time for a herring break.  This popular stand offered raw herring with onion. 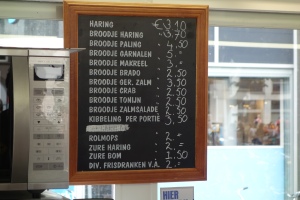 “How do I eat it?” I asked the friendly purveyor.  “Use the flag,” she explained.  I speared with herring with the toothpick flag and ate it all up, yum.

Speaking of flags, we were beginning to flag just a bit but went home via the Nine Little Streets, a charming shopping district.  We stopped at this florist shop, 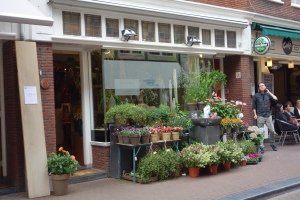 very friendly as well as elegant.  I love these bulbs striving for the light.

From here we toddled home to our little apartment in the Jordaan.

This entry was posted in Amsterdam. Bookmark the permalink.